Kids Encyclopedia Facts
Not to be confused with Common Ground Festival, a punk rock festival held in England. 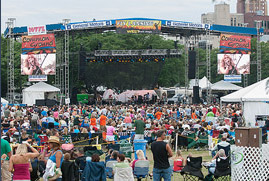 The Common Ground Music Festival is an annual week-long music festival that takes place in downtown Lansing, Michigan. The July festival, which began in the year 2000 and attracts 50,000-plus people each year, is located at the Louis Adado Riverfront Park along the Grand River. Co-created by Center Park Productions and Meridian Entertainment Group, it showcases national and regional artists in contemporary and classic rock, pop, alternative, folk, country, hip hop, and R&B music.

A year-round staff of about 10 people plan and organize the festival each year and get help from nearly 200 volunteers during the week of the event. Stage hands and temporary workers are hired to build the temporary structures.

The next Common Ground Music Festival is scheduled for 09–10 July 2021.

The festival features music from a wide range of genres, from pop, classic and modern rock, R&B and rap, to country and even blues. Several years have also included comedians. Typically each day of the festival is dedicated to a particular genre.

The festival has generated an estimated $50 million+ for the local economy since its inception. More than $400,000 has been raised and contributed to schools, non-profits and other area organizations.

Along with music the festival features a number of activities such as Ultimate Painting (a live painting competition), The Color Run, and a zip-line across the Grand River on festival grounds.

All content from Kiddle encyclopedia articles (including the article images and facts) can be freely used under Attribution-ShareAlike license, unless stated otherwise. Cite this article:
Common Ground Music Festival Facts for Kids. Kiddle Encyclopedia.