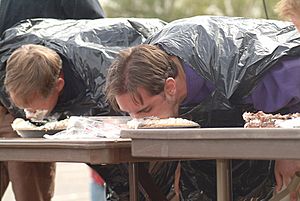 Competitive eating is a "sport" whose main goal is the quick and vast consumption of food. The type of food varies, although it is primarily focussed on fast-food. One commonly used item is hot dogs. This sport is male-dominated, although there are a handful of women gurgitators, notably Sonya Thomas. A big belly isn't necessarily an advantage in the sport, as physical fitness plays an important factor too in the upper spheres of the professional circuit.

The sport is most popular in the USA. Eating contests are often held as part of a county fair in the United States, and as such are very popular in some rural areas. The sport's recent popularity is largely the result of the Nathan's Hot Dog Eating Contest, an annual holiday tradition that has run for decades in Coney Island.

The International Federation of Competitive Eating, a public relations company, (IFOCE) runs this contest and more than 100 events annually worldwide. It counts among its members Takeru Kobayashi and Sonya Thomas, two celebrated eaters. A newer organization, the Association of Independent Competitive Eaters (AICE), was established by former IFOCE member, Coondog O'Karma, and Long Island eater, Arnie "Chowhound" Chapman, to compete with the IFOCE. According to its mission, the AICE seeks to "have fun" and its slogan is "a heart as big as its stomach." AICE events are "open" to all and do not require an exlusionionary contract like the IFOCE.

The sport of competitive eating has risen in stature in the past several years and the IFOCE offered more than $230,000 in purses at its events in 2005. Television exposure also has increased significantly. The IFOCE produced a one-hour live broadcast of the Nathan's Famous contest for ESPN and a three-hour elimination tournament on ESPN called the Alka-Seltzer US Open of Competitive Eating. 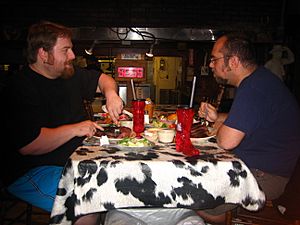 Other, more grass-roots, eating contests can involve challenges to eat a very large food item, such as a giant pizza or a massive hamburger, in a relatively short amount of time. Often, if the challenge is put on by a restaurant, the prize is that the winner does not have to pay for the large amount of food they just consumed.

While seats at some events are hotly contested, some events are easier to enter. New eaters can sign up or sometimes just show up early enough, and may be immediately be competing against the best in the world. For example, "Super" Paul Barlow Jr. of Atlanta, Georgia was standing in the audience waiting for the hot dog contest when two vacancies opened up. He quickly volunteered, wanting only a T-shirt, and was pitted aginst two nationally ranked eaters, Dale Boone and Ken Tittle, and now is a regular on the Georgia circuit and a member of the IFOCE. Paul states "It's fun, filling, and I still get free T-shirts!". 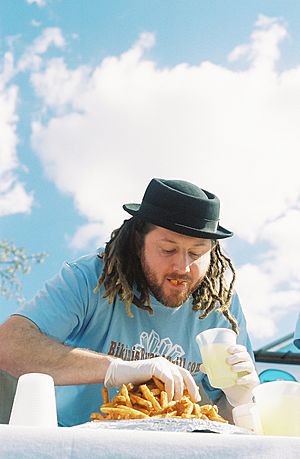 The culture of competitive eating is elucidated in the documentary film Crazy Legs Conti: Zen And The Art Of Competitive Eating, directed by Danielle Franco and Chris Kenneally. Conti, while not among the top-ranked eaters, is among the most recognizable and has become a minor celebrity. He is regularly featured in magazines such as Maxim and FHM.

The most famous competitive eaters are Takeru Kobayashi and Sonya Thomas, IFOCE members who have set phenomenal world eating records. 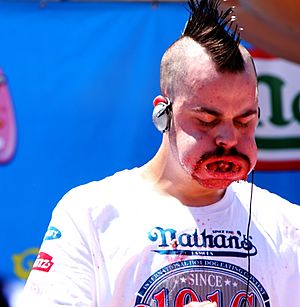 The Krystal Square Off is a series that winds its way though the south, from North Carolina to Texas.

In 1996 Mait Lepik became Estonia's banana eating champion in Tallinn. He ate ten bananas, including the peel, in three minutes. He later won a trip to the Canary Islands.

To date, the highest number of bananas anyone has consumed in one hour is 87.

This game's objective is to eat as many hot dogs as possible in a given amount of time. The most famous hot dog eating contest is the annual Nathan's Hot Dog Eating Contest, sponsored by Nathan's restaurants from Coney Island and telecast on ESPN.

This discipline's objective is to eat as many matzo balls as possible in a given amount of time. One of the most famous matzo ball eaters is Eric Booker, nicknamed "Badlands".

The intake into the body of vast amounts of food over a small time is not recommended without safety measures, and competitive eating can lead to stomach pains, obesity and botulism.

Some people consider competitive eating to be a low form of human behaviour and believe that it glorifies gluttony.

All content from Kiddle encyclopedia articles (including the article images and facts) can be freely used under Attribution-ShareAlike license, unless stated otherwise. Cite this article:
Competitive eating Facts for Kids. Kiddle Encyclopedia.