Condado Lagoon (Spanish: Laguna del Condado) is located in San Juan, Puerto Rico. It is an affluent body of water that flows freely between the Condado and Miramar neighborhoods of Santurce, a barrio of San Juan.

Its tributary stream of water forms part of the San Juan Bay Estuary. An estuary is a coastal area where fresh water from rivers and other inland water sources mixes with salt water from the ocean. The Metropolitan Area of Puerto Rico is intersected by estuarine bodies of water, such as Condado Lagoon, Martín Peña Channel, San José Lagoon and Piñones Lagoon, among others. The Cucharillas Marsh is another part of this urban ecosystem. Condado Lagoon empties into the Atlantic Ocean through El Boquerón, an inlet spanned by the Dos Hermanos Bridge through the San Antonio Creek. It is one of two natural lagoons in San Juan, Puerto Rico. 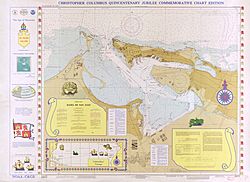 In late 2020, the Condado Ocean Club Hotel, overlooking the Condado Lagoon and the Atlantic Ocean, opened its doors. 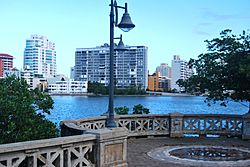 Park on the shore of the lagoon

All content from Kiddle encyclopedia articles (including the article images and facts) can be freely used under Attribution-ShareAlike license, unless stated otherwise. Cite this article:
Condado Lagoon Facts for Kids. Kiddle Encyclopedia.