Coney Island Colorado (commonly The Coney Island) in Bailey, Colorado is a 1950s diner shaped like a giant hot dog, with toppings. The building has been called "the best example of roadside architecture in the state".

It was originally built in 1966 on Colfax Ave. in Denver, named The Boardwalk at Coney Island. The first owner, Marcus Shannon had intended to start a chain of eateries around the concept, and obtained a patent for the design, but the eatery closed in 1969.

In 1970, under new ownership, the stand was moved to the Rocky Mountain town of Aspen Park, along U.S. 285. Initially called Coney Island Dairy Land, it later dropped the last part of the name. Despite initial opposition, when it was put up for sale in 1999, a local campaign began to designate it a landmark and save it from destruction. The present owner purchased it for about $150,000 and added a state-of-the-art water purification system, a new secondary kitchen area and a complete restoration of the interior kitchen.

The popularity of the stand was such that its last day open in Aspen Park, "the waiting line extended literally for miles". On March 18, 2006, to make way for a bank, the stand was moved again, 17 miles down U.S. Highway 285 to its present location in Bailey, close to Pike National Forest. 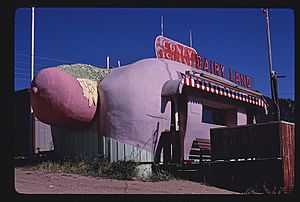 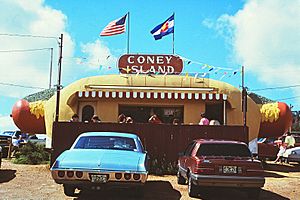 It appeared in the 1999 television documentary A Hot Dog Program and on the 2004 television program Hot Dog Heavens.

On September 22, 2003 it was featured in the nationally syndicated newspaper comic Zippy the Pinhead. [1]

There is a 1/6 scale model of the Coney Island stand at Tiny Town, in Morrison, Colorado.

All content from Kiddle encyclopedia articles (including the article images and facts) can be freely used under Attribution-ShareAlike license, unless stated otherwise. Cite this article:
Coney Island Hot Dog Stand Facts for Kids. Kiddle Encyclopedia.