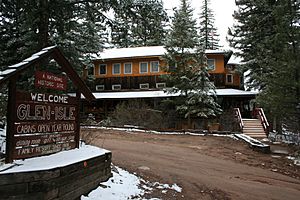 William Bailey settled a ranch and built a stage station known as Bailey's Ranch in 1864. Bailey also built a hotel at the station, and the town eventually became known as Bailey. The Denver & South Park Railroad reached Bailey in 1878, and the Bailey Post Office opened on November 20, 1878.

On March 18, 2006, the Coney Island Hot Dog Stand, a landmark building shaped like a giant hot dog was moved from Aspen Park to Bailey.

The rustic Glen-Isle Resort in Bailey, as well as the Estabrook Historic District northeast of Bailey, are both listed on the National Register of Historic Places. 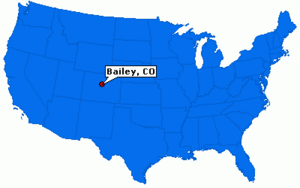 Bailey is located in the foothills of the Front Range, approximately 30 miles (48 km) southwest of Denver along U.S. Highway 285. It is located on the east side of Kenosha Pass and is one of the largest communities in the Platte Canyon region.

The Bailey HUNDO is a 100-mile endurance mountain bike race that begins and ends in Bailey. It has been an annual event since 2009, and money raised is invested in the construction of new bike trails and in youth biking initiatives in Colorado. Both the Buffalo Creek Trail System and the Colorado Trail are easily accessible from Bailey.

Tomahawk Ranch, a residential camp operated by the Girl Scouts of Colorado, is located near Bailey.

In 2004, Bailey was the location for Apogaea, an annual outdoor arts and music festival.

Bailey was referenced three times in South Park; in a season 6 episode parodying The Lord of the Rings, season 9 in "Bloody Mary", and in a season 12 episode entitled "Britney's New Look".

All content from Kiddle encyclopedia articles (including the article images and facts) can be freely used under Attribution-ShareAlike license, unless stated otherwise. Cite this article:
Bailey, Colorado Facts for Kids. Kiddle Encyclopedia.