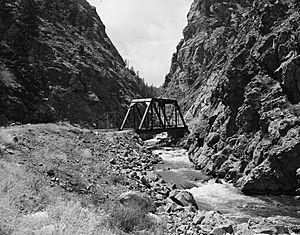 The Platte Canyon is a deep, narrow, scenic gorge on the South Platte River in the Rocky Mountains of Colorado. The canyon is southwest of Denver on the border between Jefferson and Douglas counties. The canyon is at the entrance to the mountains, where the South Platte emerges through the Rampart Range through the hogbacks onto Eastern Plains. The lower narrow section is sometimes called Waterton Canyon. 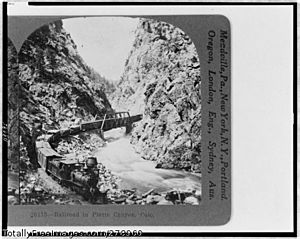 In the middle and late 1870s, the Denver, South Park and Pacific Railroad constructed the first railroad through the canyon and through the valley of the North Fork to South Park and eventually to Leadville and Gunnison. The line was initially a narrow gauge, and was later acquired by the Colorado and Southern Railway. Service on the line was terminated in 1937.

In the late 1920s, the Denver Board of Water Commissioners proposed building a dam to inundate the canyon, but the request was turned down by the Public Utilities Commission. A 1.7 miles section of Waterton Canyon was inundated by the Strontia Springs Reservoir, completed in 1983 as part of the Foothills Project for water diversion.

All content from Kiddle encyclopedia articles (including the article images and facts) can be freely used under Attribution-ShareAlike license, unless stated otherwise. Cite this article:
Platte Canyon Facts for Kids. Kiddle Encyclopedia.