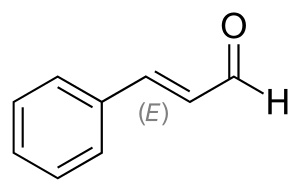 Cinnamaldehyde, a type of phenolic compound with a conjugated system

In chemistry, a conjugated system is a system of connected p-orbitals with delocalized electrons. Conjugated systems are created by several multiple bonds, each separated by single bonds. In general, conjugated systems may lower the overall energy of the molecule and increase how steady it is. They can contain lone pairs, radicals or carbenium ions. The compound may be cyclic, acyclic, linear or mixed. In most cases, the atoms in a molecule are held together by single bonds (where orbitals from adjacent atoms overlap). Molecules which have a conjugated system have unique properties different from normal compounds created by the sharing of the delocalized electrons among many atoms.

Conjugation is the overlap of one p-orbital with another across a sigma bond (or single bond) that is in between. (The d-orbitals of larger atoms can also contribute to a conjugated system).

A conjugated system has a region of overlapping p-orbitals, bridging the single bonds that are between. They allow a delocalization of pi electrons across all the adjacent aligned p-orbitals. The pi electrons do not belong to a single bond or atom, but rather to a group of atoms.

The largest conjugated systems (with the greatest number of shared electrons) are in graphite, conductive polymers, and carbon nanotubes.

Different types of molecular structures can result in conjugation. For conjugation, all the neighboring atoms in a chain must have an available p-orbital. In many cases, conjugated systems are a series of a single bonds each followed by a double bond. Other systems exist. For example, furan (see picture) is a five-membered ring with two alternating double bonds and an oxygen in position 1. The Oxygen in furan has two lone pairs, one of which fills a p-orbital on that position. The lone pair electron makes conjugation possible on a five-membered ring. The presence of a nitrogen in the ring can be a source of pi orbitals needed for conjugation. Also, pi orbitals needed for conjugation can come from substituent groups α to the ring like: a carbonyl group (C=O), an imine group (C=N), a vinyl group (C=C), or an anion.

Conjugated systems are the main things that make up chromophores. Chromophores are light-absorbing parts of a molecule that can cause a compound to have a visible color. Chromophores are often present in various organic compounds and sometimes present in polymers that are colored or glow in the dark. Chromophores often consist of a series of conjugated bonds and/or ring systems, which can include C-C, C=C, C=O, or N=N bonds. Many times, chromophores have aromatic rings.

Chemical structure of beta-carotene. The eleven conjugated double bonds that form the chromophore of the molecule are highlighted in red.

All content from Kiddle encyclopedia articles (including the article images and facts) can be freely used under Attribution-ShareAlike license, unless stated otherwise. Cite this article:
Conjugated system Facts for Kids. Kiddle Encyclopedia.