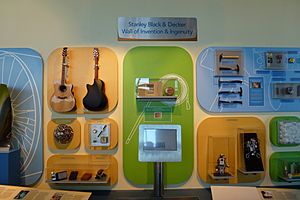 Items invented in CT on the Wall of Invention and Ingenuity

The Connecticut Science Center is a nine-story museum located on the Connecticut River in Hartford, Connecticut designed by César Pelli & Associates. It opened on June 12, 2009. The building has a total 154,000 square feet (14,300 m2) including 40,000 square feet (3,700 m2) of interactive exhibits consisting of videos, audios, visuals, tactile components, programs, and live demonstrations.

Planning for the Connecticut Science Center began in 2001. The Science Center's goals are to promote the study of science by the state's youth and to encourage urban revitalization in Hartford. The state of Connecticut provided more than $100 million of support for the $165 million museum, and the balance was donated by businesses, foundations and individuals.

The 200-kilowatt fuel cell, built by UTC Power, a United Technologies Corp. business based in South Windsor, generates 100 percent of the electricity the Science Center uses. The PureCell System is fueled with natural gas and doesn't use combustion. Instead, the gas undergoes an electrochemical process that produces direct current electricity, heat and water.

A stadium seating style theater that houses over 200 people, it has a 30×40 ft screen, an 18,000-watt Dolby® sound system and utilizes Dolby® 3D technology and glasses.

All content from Kiddle encyclopedia articles (including the article images and facts) can be freely used under Attribution-ShareAlike license, unless stated otherwise. Cite this article:
Connecticut Science Center Facts for Kids. Kiddle Encyclopedia.