Cook Peak el. 9,754 feet (2,973 m) is a mountain peak in the Washburn Range of Yellowstone National Park. The peak was named in 1922 by then superintendent Horace Albright to honor of Charles W. Cook, a member of the 1869 Cook–Folsom–Peterson Expedition which explored the Yellowstone park region. 1922 was the 50th anniversary of the park's creation, and Charles Cook, still living in Montana, attended ceremonies in the park. Prior to 1922, the peak had been named Thompson Peak by Philetus Norris in 1880 and Storm Peak by members of the Arnold Hague Geological Surveys in 1885. 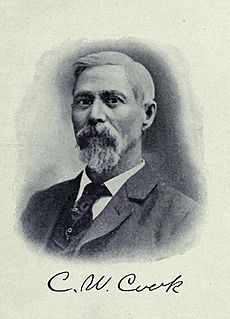 All content from Kiddle encyclopedia articles (including the article images and facts) can be freely used under Attribution-ShareAlike license, unless stated otherwise. Cite this article:
Cook Peak Facts for Kids. Kiddle Encyclopedia.