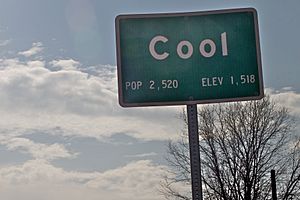 Cool, formerly known as Cave Valley, is a small unincorporated community in El Dorado County, California, about 40 miles (64 km) from Sacramento, the state capital. Cool is at an elevation of 1,532 feet (467 m).

It is built on State Route 49 between Auburn and Placerville on a hill at an elevation more than 1,500 feet (450 m) in an area full of trees, trails, camping, and other recreational activities.

According to the Köppen Climate Classification system, Cool has a warm-summer Mediterranean climate, abbreviated "Csa" on climate maps.

The first post office was established in 1885. Penobscot Public House, established in 1850, was a way station and stage coach stop during the days of the Gold Rush. The famous Penobscot Ranch still exists today. Today the historic site, including the house built during the days of the Gold Rush and the barn built in 1923, can be viewed by driving down Highway 193 four miles outside of the business center of Cool. Cool offers residents and visitors alike the opportunity to enjoy a peaceful rural residential environment, including small restaurants, as well as the Auburn State Recreational Area, which is open to the public for hiking and horsebackriding.

There is no clear record of how the town came to be called Cool. Some locals believe that a beatnik named Todd Hausman coined the name in early 1947 on a cross country road trip, and appended it to the town. However, some local historians claim that the town was named during the days of the Gold Rush after a man named Aaron Cool, though no records exist about him.

Jerry Pozo is a resident of Cool and a docent at Coloma State Historical Park who began researching the origin of Cool, CA in 2010. His research with the Chief Archivist of the Methodist Church, California History Library, and Huntington and Bancroft Libraries turned up a Reverend Peter Y. Cool whose mining career near Cave Valley was documented in his journal in Pacific Historian 10 (summer 1966 pages 19–42): Goodness Gold, and God, The California Mining Career of Peter Y. Cool 1851-52. He is the one and only itinerant preacher that shows up in El Dorado and Amador County records from 1850's-70s. Another local preacher from Placerville, Reverend C.C. Pierce was a preacher and lawyer who spoke fluent Latin and Hebrew. He may have called Peter - Brother Aaron, which means "of the mountains" and thus the confusion of the name of Aaron Cool. They are surely one and the same.

The Way Too Cool 50 Kilometer run starts and ends in the town in early March. It follows sections of the Western States Trail with more than a 7000 ft (2100 m) elevation change along its 31-mile length.

All content from Kiddle encyclopedia articles (including the article images and facts) can be freely used under Attribution-ShareAlike license, unless stated otherwise. Cite this article:
Cool, California Facts for Kids. Kiddle Encyclopedia.