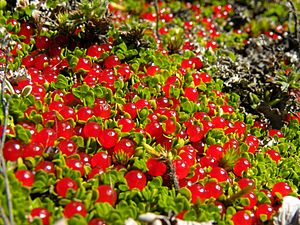 Nertera granadensis, also known as coral bead plant, pin-cushion plant, coral moss, or English baby tears, is a ground cover with orange berries, of the genus Nertera. Nertera granadensis has an unusually extensive transcontinental distribution surrounding the Pacific Ocean, occurring from southern Chile and western Argentina north to Guatemala, and in Hawaii, New Zealand, eastern Australia, Indonesia, Malaysia, Papua New Guinea, the Philippines and Taiwan. In the tropical regions of the western Pacific, Nertera granadensis only occurs at high altitudes. It does also occur on the Juan Fernández Islands. It is grown as an ornamental plant in gardens, and the name given to the plant in Mapudungun and Chilean Spanish is rucachucao. The name granadensis derives from New Granada, the old name of Colombia.

As a house plant, Nertera granadensis is somewhat difficult to maintain, and it is not recommended for beginners. The soil should be porous. It should be kept in a bright, semi-shaded place - a tropic facing window is ideal - and should not be left in direct sunlight.

During the summer, Nertera granadensis can be kept outdoors, but it still needs to be protected from direct sunlight. The temperature should not be too warm, although it should not go below 8 degrees Celsius (around 45 Fahrenheit) in the winter. During the winter and autumn gardeners should wait until the soil dries between watering.

When the flowers and berries begin forming in the spring, one should increase watering so that during the spring and the summer the soil is kept moist at all times, and the leaves and berries should be moistened occasionally, but not too frequently, as they could rot. The plant should be fed monthly with a weak solution (water-soluble fertilizers, diluted to half strength, are best) during spring/summer until it begins to flower. When the berries begin to die (turn black) they should be carefully removed.

The plant possesses brightly colored fruit, and likely offers visual appeal to young children and pets. Fortunately, the toxicity of Nertera granadensis appears to be quite low, and there are no known toxins associated with the particular parts of the plant. One study noted that of 21 children known to have ingested the plant, only five showed mild symptoms associated with poisoning, such as tiredness, stomach pains, and vomiting. In addition, a 2+1⁄2-year-old child ingested 20 of the Nertera granadensis berries with no visible ill effects.ru:Нертера

All content from Kiddle encyclopedia articles (including the article images and facts) can be freely used under Attribution-ShareAlike license, unless stated otherwise. Cite this article:
Coral bead plant Facts for Kids. Kiddle Encyclopedia.