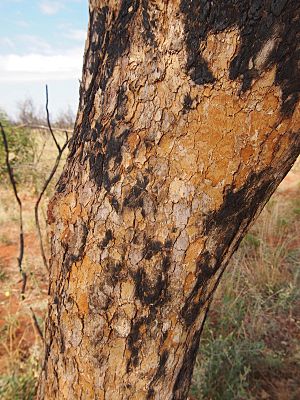 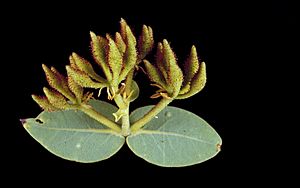 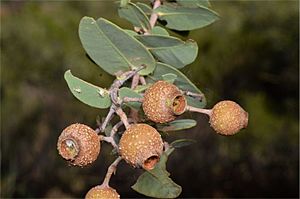 Corymbia setosa, commonly known as the rough leaved bloodwood or desert bloodwood, is a species of small tree that is endemic to north-eastern Australia. It has rough, tessellated brown bark on the trunk and branches, a crown of juvenile, heart-shaped leaves arranged in opposite pairs, flower buds in groups of three or seven, white flowers and urn-shaped to shortened spherical fruit.

This eucalypt was first formally described in 1843 by Johannes Conrad Schauer in Walpers' book Repertorium Botanices Systematicae and given the name Eucalyptus setosa from specimens collected by Ferdinand Bauer. In 1995 Ken Hill and Lawrie Johnson changed the name to Corymbia setosa. The specific epithet (setosa) is from the Latin word setosus meaning "bristly".

In the same journal, Hill and Johnson described two subspecies, pedicellaris and subspecies setosa but the names are not accepted by the Australian Plant Census.

Corymbia setosa grows on rocky hills and red sandy plains, but not extending to wet tropical areas. It is found from Tennant Creek, Northern Territory, Daly Waters and the Barkly Tableland in the Northern Territory and east into the Gulf of Carpentaria hinterland and islands, to the Musgrave area of Cape York Peninsula and as far south as Barcaldine in Queensland.

This species of eucalypt is classified as of "least concern" under the Queensland Government Nature Conservation Act 1992.

All content from Kiddle encyclopedia articles (including the article images and facts) can be freely used under Attribution-ShareAlike license, unless stated otherwise. Cite this article:
Corymbia setosa Facts for Kids. Kiddle Encyclopedia.