Cottonwood is an unincorporated community in southeastern Callahan County, Texas, United States, on FM 880, eight miles northwest of Cross Plains. It was first settled by J. W. Love in 1875, under the name Cottonwood Springs. The name was shortened to Cottonwood when a post office was established there. The town has a community center, active church of Christ and Baptist Church congregations, a Methodist Church building, and a volunteer fire department.

Cottonwood is part of the Abilene, Texas Metropolitan Statistical Area. 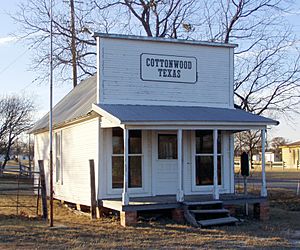 A historical marker just outside the town reads as follows:

After Indians on High Plains were subdued (1874) by Gen. R. S. MacKenzie, settlers started to pour into this area, where they found abundant game, water, and good soil for ranching, farming. Cottonwood Springs, at head of Green Briar Creek, was one of first villages founded (in 1875). The town soon became a trading center for southeastern part of county. It had several stores, two churches, and a school; and although usually peaceful, it experienced many gun battles. The town name was shortened to "Cottonwood" after first post office was established in 1883.

In the center of the town, a building labeled "Cottonwood Texas" still stands, which was once the town's bank and post office. Its historical marker reads,

W. F. Griffin opened a bank about 1911 in this small frame building. With Griffin as a director, Paul Ramsey served as the first president. His duties included teller, cashier, loan officer and custodian. When the railroad bypassed Cottonwood, merchants and residents moved away. In January 1915, the bank closed. In 1918 Hazel Respess opened a post office in the building and ran it for the next 50 years. In 1975, postal service here was stopped. This spot has been a gathering place for the community.

All content from Kiddle encyclopedia articles (including the article images and facts) can be freely used under Attribution-ShareAlike license, unless stated otherwise. Cite this article:
Cottonwood, Callahan County, Texas Facts for Kids. Kiddle Encyclopedia.