Cross Plains is a town in Callahan County, Texas, United States. The population was 982 at the 2010 census. It is part of the Abilene, Texas Metropolitan Statistical Area.

According to the United States Census Bureau, Cross Plains has a total area of 1.2 square miles (3.1 km2), all of it land.

There were 432 households out of which 28.9% had children under the age of 18 living with them, 50.2% were married couples living together, 10.6% had a female householder with no husband present, and 33.8% were non-families. 32.2% of all households were made up of individuals and 19.4% had someone living alone who was 65 years of age or older. The average household size was 2.40 and the average family size was 3.03.

Cross Plains was once named "Turkey Creek", after the stream that now crosses the town's Treadaway Park. In its early years, Cross Plains had the basic necessities like a store, a cotton gin and gristmill, but little else. Hugh Henry McDermett and J.C. McDermett, early settlers here, petitioned the federal government to establish a post office in Cross Plains. In 1878, the government granted the post office, named "Cross Plains" for the crossings of stagecoach and military roads prior to the Civil War. East and West Caddo Peaks, located 5 miles (8 km) west, were used as landmarks by early Indians, soldiers, and government surveying crews.

The town had one newspaper in 1902 (The Herald), but it soon went out of business. The second paper, The Cross Plains Review, started in 1909 and continues to publish a weekly newspaper every Wednesday. The town moved from the west banks of Turkey Creek to its present site in January 1911, to be closer to the railroad. On January 12, 1911, the a train full of prospective land buyers arrived in Cross Plains. Before the day was out, $75,000.00 worth of land had been purchased. Cross Plains was the last stop on the Texas Central Katy Railroad spur from De Leon and Rising Star. The Katy abandoned the spur in the 1940s. An oil boom in 1925 increased the population, and by 1940 it was over 1,200. It has remained hovering around the 1,000 mark for the last 50 years. 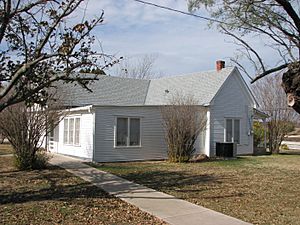 The Robert E. Howard Museum, former home of the author

On December 27, 2005, a grass/range wildfire destroyed 116 homes in and around Cross Plains. On December 29, 2005, the Texas Department of Public Safety listed 85 single family homes, 25 mobile homes and 6 apartment units as being destroyed. An additional 36 homes were damaged. The First United Methodist Church building of Cross Plains was also destroyed. Two people died after being trapped in their houses.

The fire spared the nearly century-old house (now a museum) of Robert E. Howard, author of the Conan the Barbarian books.

The climate in this area is characterized by hot, humid summers and generally mild to cool winters. According to the Köppen Climate Classification system, Cross Plains has a humid subtropical climate, abbreviated "Cfa" on climate maps.

All content from Kiddle encyclopedia articles (including the article images and facts) can be freely used under Attribution-ShareAlike license, unless stated otherwise. Cite this article:
Cross Plains, Texas Facts for Kids. Kiddle Encyclopedia.