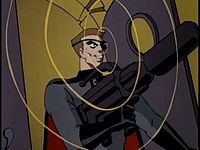 Vertigo as depicted on Batman: The Animated Series

Count Werner Vertigo is a DC Comics supervillain. First appearing in World's Finest Comics #251 (July 1978), Count Vertigo is the last descendant of the royal family that ruled the small eastern European country of Vlatava, that was taken over by the Soviets, and would later become devastated by the Spectre.

Count Vertigo first appeared in Star City, where he attempted to steal back the jewels his parents had sold when they escaped to England after the war. The victim of a hereditary inner ear defect that affected his balance, Vertigo had a small electronic device implanted in his right temple that compensated this problem. Tinkering with the device, Vertigo learned he was able to affect other people’s balance as well, distorting their perceptions so that they literally couldn’t tell up from down, an effect known as vertigo. This would bring him in conflict with the heroes Green Arrow and Black Canary.

Count Vertigo as depicted on The Batman

This odd ability is also capable of disrupting guidance systems on missiles, vehicles and detection systems of all kind (lasers, cameras, pressure sensitive floor plates, infra-red, thermal and night vision). Count Vertigo also wears magnetic boots through which he can walk walls or ceilings. He also has the ability of flight.

He was voiced by Michael York in Batman: The Animated Series.

All content from Kiddle encyclopedia articles (including the article images and facts) can be freely used under Attribution-ShareAlike license, unless stated otherwise. Cite this article:
Count Vertigo Facts for Kids. Kiddle Encyclopedia.