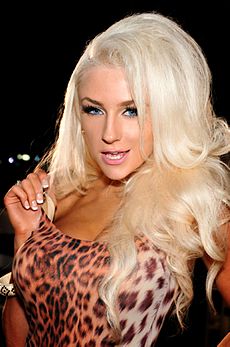 Courtney Alexis Stodden (born August 29, 1994) is an American television personality. In August 2013, she became a housemate after she was on the British version of Celebrity Big Brother. She was kicked out on Day 21 of that series.

She was born in Tacoma, Washington. At age 16 she married an actor named Doug Hutchison. They divorced. At age 19 they remarried.

All content from Kiddle encyclopedia articles (including the article images and facts) can be freely used under Attribution-ShareAlike license, unless stated otherwise. Cite this article:
Courtney Stodden Facts for Kids. Kiddle Encyclopedia.