In February 2013, Cox Communications acquired the naming rights to the facility, and renamed it the Cox Business Center, to sync with their Cox Business brand. In 2020, "Convention" was added to the name.

The CBCC began renovations to convert the arena into a banquet hall in 2018, with a scheduled completion date of 2020.

The CBCC's banquet hall was the largest in the state at 30,000 square feet, however, the venue's $55 million renovations replaced the Center's arena with the Grand Hall, a second Banquet space with 41,470 square feet, and 38' ceilings.

It also added a new South Plaza at the main entrance on the east side. This includes a three-story glass atrium, valet drop off, and over 4,000 square feet of pre-function event space. The venue now offers over 275,000 square feet of total rentable space.

The renovation is part of Vision Tulsa, a community improvement initiative funded by a 0.6% increased sales tax in Tulsa County.

The Bank of Oklahoma Center, or BOK Center, which is owned by the City of Tulsa, is the sister venue to CBCC, with both being managed by ASM Global. Together, they comprise the ASM Global-Tulsa. The BOK Center is a 19,199-seat arena, and home to the ECHL Tulsa Oilers. It also hosts major concerts and entertainment shows. It was designed to accommodate arena football, hockey, basketball, concerts, and similar events. The BOK is the former home of the Tulsa Shock of the Women's National Basketball Association and the Tulsa Talons of the Arena Football League.

It cost $178 million in public funds to build, as well as $18 million in privately funded upgrades. The Center was completed on August 30, 2008. 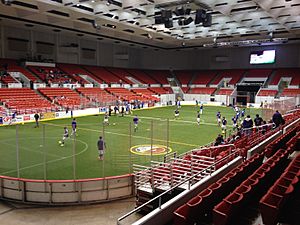 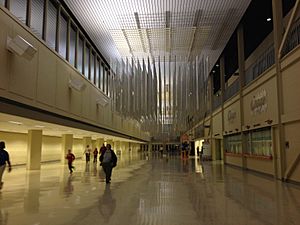 Lobby of the Cox Business Center.

The original Tulsa Roughnecks used the CBCC's building for indoor soccer in 1978. In November 2013, it became the home arena of the Tulsa Revolution of the Professional Arena Soccer League. The team relocated to the Expo Square Pavilion in January 2015.

The center was home to the Central Hockey League Tulsa Oilers ice hockey team, and to the Tulsa Talons arena football team before the opening of the new BOK Center in 2008. It was a regular stop for Bill Watts' Mid-South Wrestling and its successor, the Universal Wrestling Federation, until shortly after the UWF was purchased by Jim Crockett Promotions in 1987. It hosted the Missouri Valley Conference men's basketball tournament title game in 1982 and from 1984-87. It was also the home to the Tulsa Golden Hurricane basketball team until the program moved to the Reynolds Center in 1998.

The Professional Bull Riders (PBR) circuit hosted a Built Ford Tough Series event at the Convention Center between 2005 and 2008; since 2009, the event has been held at the BOK Center. From 2009 through 2012, the Convention Center was the home arena for the Tulsa 66ers of the NBA Development League. In 2013, the team returned to the SpiritBank Event Center in nearby Bixby. In March 2012, the now-defunct Oklahoma Defenders of the American Professional Football League played their first game at the arena.

All content from Kiddle encyclopedia articles (including the article images and facts) can be freely used under Attribution-ShareAlike license, unless stated otherwise. Cite this article:
Cox Business Convention Center Facts for Kids. Kiddle Encyclopedia.