The BOK Center, or Bank of Oklahoma Center, is a 19,199-seat multi-purpose arena and a primary indoor sports and event venue in Tulsa, Oklahoma, United States. Designed to accommodate arena football, hockey, basketball, concerts, and similar events, the facility was built at a cost of $178 million in public funds and $18 million in privately funded upgrades. Ground was broken on August 31, 2005 and a ribbon-cutting ceremony took place on August 30, 2008.

Designed by César Pelli, the architect of the Petronas Towers in Malaysia, the BOK Center is the flagship project of Tulsa County's Vision 2025 long-range development initiative. Local firm, Matrix Architects Engineers Planners, Inc, is the architect and engineer of record. The arena is managed and operated by SMG and named for the Bank of Oklahoma, which purchased naming rights for $11 million. The only current permanent tenant is the Tulsa Oilers of the ECHL.The BOK Center was the former home of the Tulsa Shock of the Women's National Basketball Association and the Tulsa Talons of the Arena Football League. 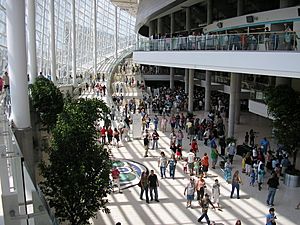 Tulsa city officials asked César Pelli to create an arena that would be an architectural icon. To achieve this, Pelli employed cultural and architectural themes of the city, including Native American, art deco, and contemporary styles. He made heavy use of swirling circular elements in the exterior and interior designs of the building. A 103-foot (31 m), 600-foot (180 m) long glass facade featuring 1,600 350-pound (160 kg) panels wrap around the building in an escalating motion leaning at a five-degree angle. 33,000 stainless steel panels produced and installed by Zahner continue the upward spiraling path around the circumference of the structure. The interior follows the motion, with grand staircases that wrap around a portion of the building from the main lobby. In total, the building's design required 350,000 square feet (33,000 m2) of exterior stainless steel panels, 75,000 square feet (7,000 m2) of glass, 30,000 cubic yards (23,000 m3) of concrete, and 4,000 tons of structural steel.

The arena encompasses 565,000 square feet (52,500 m2) and reaches a maximum height of 134 feet (41 m). Inside, the bowl area's ceiling rises 120 feet (37 m) over the base floor and a 930-foot (280 m)-long HD ribbon screen wraps around the three-level seating area. There are 17,343 fixed seats, each ranging from 20 inches (51 cm) to 22 inches (56 cm) wide—an average width greater than the industry standard, including that of Chesapeake Energy Arena in Oklahoma City. Actual capacity fluctuates with configuration patterns, and total seating can vary from 13,644 to 19,199—13,644 for partial-use concerts, 16,582 for arena football, 17,096 for hockey, 17,839 for basketball, and 19,199 for center stage concerts. The bowl area's second floor, an exclusive carpeted level with a complete bar, houses press areas and 37 luxury suites, each with 15 22-inch (56 cm) seats and furnished gathering and kitchen areas. In the main concourse, more than 130,000 square feet (12,000 m2) of terrazzo flooring has aggregate that contains 70% mother of pearl. Private funding exceeded original forecasts, and unexpected increases in revenue from corporate sponsorships, donations, and purchases of box seats and luxury boxes paid for an advanced light display for the glass wall that wraps around the front of the building and the scoreboard. 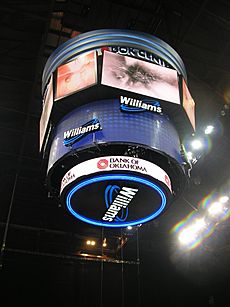 The BOK Center holds 37 public restrooms—12 men's restrooms, 16 women's restrooms, and 9 family restrooms—with 300 toilets and urinals. Dressing rooms with wooden lockers, hydrotherapy and workout rooms, a players lounge, locker rooms for game officials, and office space for coaches, trainers, and equipment managers are also located within the building. The arena's hanging scoreboard, considered one of the most advanced in the country, is suspended above the arena floor and measures 50,000 pounds (23,000 kg) and 30 by 33 feet (9.1 m × 10.1 m), making use of four 8 by 14 feet (2.4 m × 4.3 m) HD screens, four 8 by 8 feet (2.4 m × 2.4 m) HD screens, a wrap-around 9-foot (2.7 m) HD screen, and another 3-foot (0.91 m) wrap-around HD screen. Designed by Forty Forty Agency and manufactured by Daktronics, the project received $3.6 million in private donations, with some funds going toward an advanced video recording system.

Nearly $1.5 million was allocated to artwork within the building in light of a city ordinance mandating that at least 1% of construction costs for any municipal project be used for public art. Tulsa's Arts Commission selected five artists out of nearly 300 applicants to decorate the interior of the building with the intention of capturing the spirit of the city and state. Of their pieces, the largest is a cloud-like cloth sculpture designed by Kendell Buster that weighs 5,000 pounds (2,300 kg) and hangs above the main concourse. Four 22-foot (6.7 m) Native American medallions designed by Bill and Demos Glass decorate the main concourse floor, along with a series of 25 paintings of tallgrass prairie landscapes created by Mark Lewis that adorn a wall on the main lobby's third level. A 9 by 24 feet (2.7 m × 7.3 m) black-and-white painting of rearing horses created by Joe Andoe hangs on a wall near a concession stand on the north side of the building, and a light display created by Jenny Holzer is also within the arena.

The city of Tulsa owns the arena but has a five-year management contract worth $950,000 with SMG property management, the largest arena manager in the world. SMG, which also manages the nearby Cox Business Center in addition to Chesapeake Energy Arena and Cox Convention Center in Oklahoma City, employs more than 70 full-time workers and 400 part-time workers in Tulsa and assumes the building's annual operations cost of $6,267,752. The current General Manager is Casey Sparks. 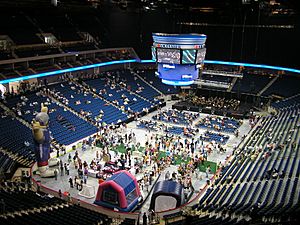 A public open house on August 30, 2008 served as the arena's opening event.

A campaign promise by former Tulsa mayor Bill LaFortune to hold a municipal planning conference was fulfilled within months of taking office in 2002. Although voters rejected tax packages for arenas in 1997 and 2000, a third plan for a downtown arena was the brainchild of the conference, along with dozens of other projects throughout Tulsa County, including a renovation of the nearby Tulsa Convention Center costing $42 million. Vision 2025, a tax initiative increasing sales taxes by six-tenths of a cent over 13 years, was approved by voters in September 2003. Pelli's design was released in September 2004 and construction began in August 2005.

Tulsa Vision Builders, a joint project of Tulsa-based Flintco and Manhattan Construction, was chosen to build the arena. Its original budget was deemed $141 million, but increases in the cost of structural steel, concrete, and labor due to Hurricane Katrina and a robust local economy pushed the cost to $178 million in 2006. An additional $18 million in private funding was used in miscellaneous upgrades, bringing the total cost of the arena to $196 million.

A ribbon-cutting ceremony involving Tulsa musicians Garth Brooks and Hanson took place on August 30, 2008. The arena's schedule of concerts and other events began on August 31 with a community choir hosted by Sam Harris.

The BOK Center is home to one minor league professional sports team, the Tulsa Oilers ice hockey team of the ECHL. The arena was formerly the home of the Tulsa Talons Arena Football League team from 2009 (while they were in the af2) to 2011. Also, the Tulsa Shock of the Women's National Basketball Association, previously known as the Detroit Shock, played all play their home games at the BOK Center from 2010 to 2015 before relocating to Dallas-Ft. Worth.

In March 2010, the Conference USA Men's Basketball Tournament was held there. BOK Center later hosted second and third-round games in the NCAA Men's Division I Basketball Championship on March 18 and 20, 2011.

On June 20, 2020, US President Donald Trump visited the BOK Center for a campaign rally. This was his first campaign rally in 110 days. The reported attendance turn out was seemingly "lower than expected,", though it attracted considerable cable news and political network ratings.

Paul McCartney performed on August 17, 2009. The event launched the "One Year Birthday" celebration of the venue. The stop in Tulsa was McCartney's first in Oklahoma since 2002 and was the only arena show of his 2009 Summer Tour. McCartney also played at the venue on May 29 and 30, 2013 as part of his, Out There! Tour.

Streets bordering the BOK Center's back entrance are closed to traffic during events.

City officials estimate there are 12,000 parking spaces within a 10-minute walk of the BOK Center with a city-owned parking garage diagonally across the street from the arena. During major events, Tulsa Transit runs free shuttle bus services to and from the arena and downtown Tulsa. Through a program instituted by the Tulsa Convention and Visitors Bureau, 50 guides are stationed within dozens of blocks of the arena during major events to help with parking and provide general information about shuttle services, events, and downtown Tulsa.

All content from Kiddle encyclopedia articles (including the article images and facts) can be freely used under Attribution-ShareAlike license, unless stated otherwise. Cite this article:
BOK Center Facts for Kids. Kiddle Encyclopedia.