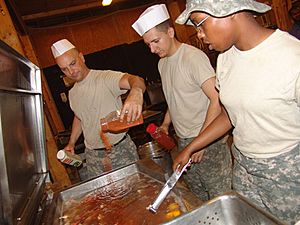 Crab boil is a spice mixture that is used to flavor the water in which crabs or other shellfish are boiled. A crab boil is also a social event where boiled crabs are eaten, a kind of seafood boil. Crab boils are known in the Ville Platte areas of Louisiana as "dome lobster boils," stemming from the local term "dome lobster" based on the shape and composition of crabs and their likeness to a domed lobster. The largest of these gatherings is the Crayon d'Orange festival (French for 'Orange Pencil') in Evangeline Parish.

Boiled seafood in southern Louisiana tends to be spicier than that found in other parts of the country. Homemade crab boil recipes call for abundant amounts of hot sauce, cayenne pepper, salt, bay leaf, lemon, and garlic. Mustard seeds, coriander seeds, and allspice are popular extra options. Many people will start with a commercial crab boil product and then supplement it with extra pepper. The leading commercial product is Zatarain's which comes in two forms. One is a mesh bag with seasonings inside that will steep into the water. The second is a liquid concentrate that can be added directly to the water. The concentrate form can also be used as a flavor enhancer for soups. Other regional crab boil companies are Tony Chachere's, and Rex Crab Boil. Note that even when boiling shrimp or crawfish, most recipes call for adding crab boil packets as a seasoning.

Maryland crabs are prepared by seasoning generously with Chesapeake Bay crab seasoning such as Old Bay and then steaming over, not in, vinegared water (often, beer is added to the steaming water).

The Lowcountry boil, Tidewater boil, and Frogmore Stew are variations on the same theme in North and South Carolina. Here, recipes may go in either a Louisiana or Maryland direction. Some call for the zestier Zatarain's, others call for Old Bay, and a few advocate both.

All content from Kiddle encyclopedia articles (including the article images and facts) can be freely used under Attribution-ShareAlike license, unless stated otherwise. Cite this article:
Crab boil Facts for Kids. Kiddle Encyclopedia.