Old Bay Seasoning is a blend of herbs and spices that is marketed in the United States by McCormick & Company, and originally created in Baltimore, Maryland.

The seasoning is a mix of celery salt, black pepper, crushed red pepper flakes, paprika, and many others. Some of the other spices that may be used are laurel leaves, mustard, salt, cardamom, cloves, and ginger as listed in the original product in the Baltimore Museum of Industry. It is regionally popular, specifically in Maryland, as well as in the Mid-Atlantic States, the Southern States, and parts of New England and the Gulf Coast. 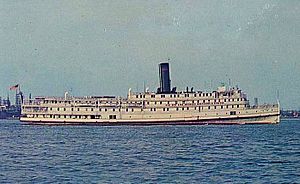 The Old Bay Line, after which Old Bay is named

Old Bay Seasoning is named after the Old Bay Line, a passenger ship line that plied the waters of the Chesapeake Bay from Baltimore to Norfolk, Virginia, in the early 1900s. In 1939, a Jewish-German immigrant named Gustav Brunn started the Baltimore Spice Company. Gustav had previously been fired from McCormick after just two days on the job when his employer found out that he was Jewish.

The origins of the company began in Wertheim, Germany, where Brunn started a wholesale spice and seasoning business selling to food industries, seeing an opportunity as spices were in especially short supply amidst hyperinflation in the aftermath of World War I. Due to rising antisemitism as the Nazi Party rose to power, the company moved to Frankfurt, Germany; however, on the night of November 10, 1938, a massive pogrom against Jews, known as Kristallnacht, led to Brunn being arrested by Nazi soldiers and sent to Buchenwald concentration camp.

According to Brunn's son, Gustav's wife paid a large sum of money to a lawyer for him to be released, and as they had already applied for and received American visas, were able to escape with their two children to New York City, and later Baltimore, Maryland, where Brunn had family. There, having brought with him only a small spice grinder, Brunn first produced the "Delicious Brand Shrimp and Crab Seasoning", which was later renamed Old Bay.

The rights to the seasoning brand were purchased by McCormick & Co in 1990. McCormick continued to offer Old Bay in the classic yellow can.

McCormick has a number of other products under the Old Bay banner, including seasoning packets for crab cakes, salmon patties and tuna, tartar sauce, cocktail sauce, and seafood batter mix. They also make other seasoning blends that mix Old Bay seasoning with garlic, lemon, brown sugar, herbs and blackened seasonings. McCormick has offered a lower-sodium version of Old Bay Seasoning. 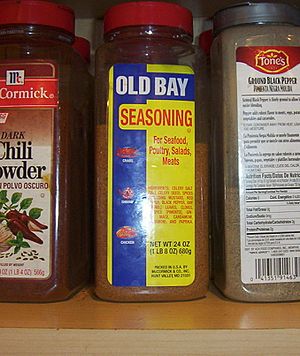 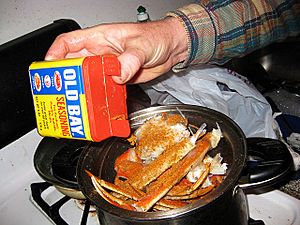 The seasoning is chiefly used to season crab and shrimp. It is also used in various clam chowder and oyster stew recipes. The seasoning is also used as a topping on popcorn, salads, eggs, fried chicken, french fries, tater tots, corn on the cob, boiled peanuts, dips, chipped beef, baked potatoes, potato salad, potato chips, and guacamole. Several movie theaters in the Chesapeake region offer it in the condiment section.

Early in its history, the Subway sandwich shop used Old Bay when mixing their seafood and crab salad. Many local Subway shops still have Old Bay for use on sandwiches. Convenience store chain Sheetz also uses Old Bay as an option for their MTO's chain wide due to their large presence in the Mid-Atlantic region, including at their locations in North Carolina, Ohio, West Virginia, and Western Pennsylvania, well out of Old Bay's traditional territory.

Old Bay is also occasionally used around the Chesapeake Bay region as an ingredient in Bloody Marys, and even in places as far south as The Breakers Hotel in Palm Beach, Florida. Some bars in the Baltimore region also often sell what is known as a 'Crabby Bo', which is National Bohemian beer where the lip of the glass or mug that is being used is moistened and dipped into a container of Old Bay seasoning. In 2014, the Maryland-based brewery Flying Dog created an Old Bay-inspired summer ale named Dead Rise to celebrate the seasoning's 75th anniversary.

In 2020, McCormick created Old Bay Hot Sauce in advance of the Super Bowl, which initially sold out within 30 minutes of its launch and caused the Old Bay website to temporarily crash. Some customers resold the 10-US-fluid-ounce (300 ml) bottles, retailing for $3.49, online for between $50 to $200.

All content from Kiddle encyclopedia articles (including the article images and facts) can be freely used under Attribution-ShareAlike license, unless stated otherwise. Cite this article:
Old Bay Seasoning Facts for Kids. Kiddle Encyclopedia.