Chipped beef is a form of pressed, salted and dried beef that has been sliced into thin pieces. Some makers smoke the dried beef for more flavor. The modern product consists of small, thin, flexible leaves of partially dried beef, generally sold compressed together in jars or flat in plastic packets. The processed meat producer Hormel once described it as "an air-dried product that is similar to bresaola, but not as tasty."

Chipped beef could be used to make frizzled beef (creamed chipped beef or SOS in military slang), or with eggs. 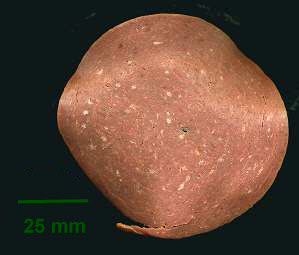 Chipped beef is served in many diners and restaurants in the United States as a breakfast item. It is popular among the veteran community; chipped beef in milk gravy (or "S.O.S.") is a common traditional meal which is served in all branches of the United States Armed Forces due to its reasonable nutritional profile, ease and speed of preparing, and relatively low cost to produce in large quantities (i.e. in quantities sufficient to properly feed an entire military outpost). Creamed chipped beef is standard fare on many such diner menus, especially in the Mid-Atlantic, but has become harder to find in chain restaurants that serve breakfast; among the restaurants still offering chipped beef on toast are Golden Corral and Silver Diner. IHOP no longer offers this on their menus, having substituted sausage gravy, and the same is true for Cracker Barrel restaurants. It is also available from companies such as Stouffer's in a frozen form which can be put on top of separately-prepared toast; it is typically quite salty. For instance, Stouffer's creamed chipped beef contains 590 mg sodium per 5.5 ounces (160 g) serving.

The mixture was also, at one point, available from both Freezer Queen and Banquet as "hot sandwich toppers"; as of late 2007, Freezer Queen no longer makes this product, and the Banquet variety is rarely found. Finally, both the Esskay Meat Company of Baltimore and Knauss Foods make a refrigerated version of creamed chipped beef which can be easily microwaved. The meat itself is also available for purchase under the Knauss and Carson's Brand names. Steak-umm is used as a substitute.

In the United States, chipped beef on toast was commonly served to service members of the United States Armed Forces. It was thus considered emblematic of the military experience, much as pea soup is in Finland or Sweden. In American military slang it is commonly referred to by the dysphemism "Stew On a Shingle", "Same Old Stuff", "Something On a Shingle", or occasionally "Save Our Stomachs".

All content from Kiddle encyclopedia articles (including the article images and facts) can be freely used under Attribution-ShareAlike license, unless stated otherwise. Cite this article:
Chipped beef Facts for Kids. Kiddle Encyclopedia.