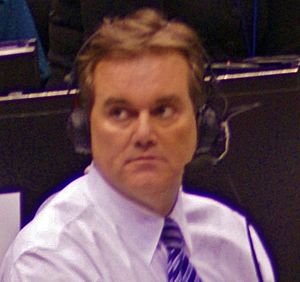 He has called college football and college basketball games for Fox Sports Net, FX, Fox, CBS, ESPN, and CBS College Sports. He called arena football games for ESPN as well as Miami Dolphins preseason games. He called regional NFL games for CBS until 2011. He is also the TV voice of the Utah Jazz. He filled in for Dick Stockton on the NFL on Fox on week four of the 2011 season between the Atlanta Falcons and the Seattle Seahawks.

Bolerjack was born in Willows Springs, Missouri. He lives in Salt Lake City.

All content from Kiddle encyclopedia articles (including the article images and facts) can be freely used under Attribution-ShareAlike license, unless stated otherwise. Cite this article:
Craig Bolerjack Facts for Kids. Kiddle Encyclopedia.