Creevykeel Court Tomb is a court tomb in Ireland. It is one of the best-preserved court tombs. It is in the foothills of Tievebaun Mountain, close to the sea near Mullaghmore in County Sligo. 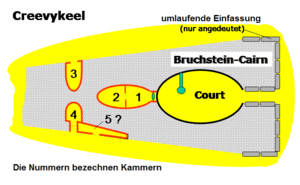 The tomb was built in the Neolithic Period, 4000-2500 BC. It has a long, trapeze shaped cairn (pile of stones). An oval court is inside that. There is also a burial chamber at the northwest of the court. That chamber has two rooms. In the back of the cairn are three smaller chambers built into the cairn.

"The old name for Creevykeel is Caiseal a' Bhaoisgin (the Fort of Bhaoisgin), Bhaoisgin being the well near the cairn."

The Creevykeel Court Tomb was excavated in 1935 by the fourth Harvard archaeological mission. That mission was one part of scientific excavations that occurred in Ireland. The leader of the excavation was Hugh O'Neill.

All content from Kiddle encyclopedia articles (including the article images and facts) can be freely used under Attribution-ShareAlike license, unless stated otherwise. Cite this article:
Creevykeel Court Tomb Facts for Kids. Kiddle Encyclopedia.