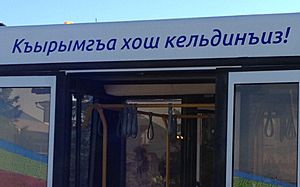 Crimean tatar writing on an airport bus in Simferopol. The writing translates to "Welcome to Crimea!" 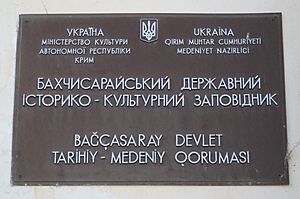 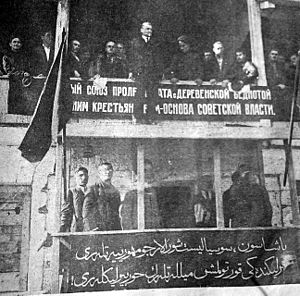 Crimean Tatar , in Arabic scripzt, on a photo from 1924

The Crimean Tatar language (which is often simply called Crimean) is spoken by Crimean Tatars who live mostly in the Crimean peninsula. It is one of the Kipchak languages, which are also called Northwestern Turkic languages. The language is not related to the Tatar language. Speakers of one language cannot understand people who speak the other. There are about 500,000 native speakers of Crimean. About half of them live on the Crimean peninsula, about 200,000 in Uzbekistan, about 30,000 in Russia, 2,500 in Romania and 6,00 in Bulgaria.

All content from Kiddle encyclopedia articles (including the article images and facts) can be freely used under Attribution-ShareAlike license, unless stated otherwise. Cite this article:
Crimean Tatar language Facts for Kids. Kiddle Encyclopedia.