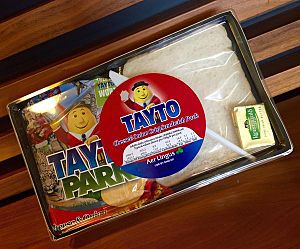 In Ireland, crisp sandwiches are also often called Tayto sandwiches in reference to the popular Irish crisp brand and its Northern Irish counterpart. The Irish airline Aer Lingus offered a Tayto sandwich pack as part of their in-flight menu from 2015 to 2016. In 2015, a pop-up shop was opened by Tayto in Dublin to raise funds for charity, and a similar shop was opened for December 2016. In 2018, the sandwiches were offered through Deliveroo for a limited period. An Irish pub in New York City sells an adaptation of the crisp sandwich as part of its Irish menu.

All content from Kiddle encyclopedia articles (including the article images and facts) can be freely used under Attribution-ShareAlike license, unless stated otherwise. Cite this article:
Crisp sandwich Facts for Kids. Kiddle Encyclopedia.