The mountain was the site of the world's first wind farm. In 1980, US Windpower installed 20 wind turbines rated at 30 kilowatts each, on the shoulder of Crotched Mountain. The company went out of business and the wind turbines were dismantled years ago. 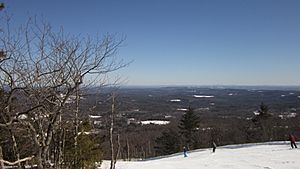 View from near the summit of the mountain, looking southeast

All content from Kiddle encyclopedia articles (including the article images and facts) can be freely used under Attribution-ShareAlike license, unless stated otherwise. Cite this article:
Crotched Mountain Facts for Kids. Kiddle Encyclopedia.