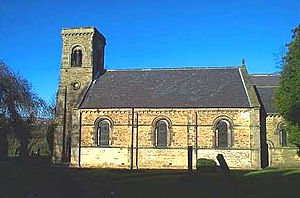 Croxdale is a village in the civil parish of Croxdale and Hett, situated about 3 miles south of Durham City, in County Durham , England and on the A167 road, formerly part of the Great North Road. The village has a corner shop (formerly the village Post Office), two Public Houses: The Daleside, a traditional English style pub and The Croxdale Inn/Penash an Indian restaurant and bar and a working men's club. There is a play park for the children of the village which was funded by a series of summer fun days.

The Community Centre located in the village is in the old school hall it hosts various clubs and acts as the polling station on election days it is visited by a chip van every Tuesday.

History of the Village The original Croxdale is a small settlement around Croxdale Hall which is about half a mile to the north east of the modern village. First mentioned in records as Crokesteil in 1195 the name may come from a Viking named Krokr and the shape of the river bends that meander like a tail. Ownership of Croxdale dates back to 1291 when it was owned by a Roger Routhberi. By the early 15th century ownership had past to the Salvin family who still own Croxdale Hall and the surrounding estate to this day. The Weardale Way long distance footpath passes through the estate and provides opportunities for views of the old Croxdale's buildings.

The Church built in 1845 and dedicated to St. Bartholemew, is a handsome structure in the Norman style. It consists of nave, chancel, and western tower and is situated at the western extremity of the village of Sunderland Bridge. In exchange for the ancient chapel situated on the nearby Croxdale Estate, Gerard Salvin, Esq., gave the site of this church, the old chapel now being used as a mortuary chapel for the Salvin family.

The modern village of Croxdale exists because of coal mining coming to the area. 1845 saw the opening of the Croxdale Pit this closing by 1870. 1875 saw a return of coal mining as the Weardale Iron and Coal Company opened Croxdale Colliery just to the south of Sunderland Bridge. Housing was built to accommodate mine workers and their families, a Methodist Chapel completed in 1877 and a school built in 1878-79 (now the Community Centre) as well as St Bartholemew's being extended in 1878. The colliery closed in 1934. The village was home to a munitions factory during World War 2 which became the NESS furniture factory once peace was restored. The factory closed in 2015. In early 2017 it was announced that the former factory would be converted into a business hub with offices, service yards and storage and distribution facilities. 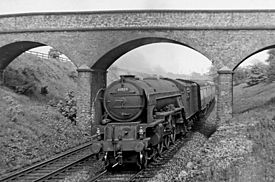 All content from Kiddle encyclopedia articles (including the article images and facts) can be freely used under Attribution-ShareAlike license, unless stated otherwise. Cite this article:
Croxdale Facts for Kids. Kiddle Encyclopedia.