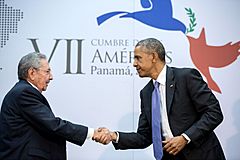 The United States–Cuban Thaw (Spanish: deshielo cubano) is a warming of Cuba–United States relations that began in December 2014, ending a 54-year break between the nations. In March 2016, Barack Obama became the first U.S. President to visit Cuba since 1928.

On December 17, 2014, U.S. President Barack Obama and Cuban President Raúl Castro announced the beginning of a process of normalizing relations between Cuba and the United States. The normalization agreement was secretly negotiated in the months before, being overseen by Pope Francis and largely hosted by the Government of Canada.

Meetings were held in Canada and in Vatican City. The agreement would see the lifting of some U.S. travel restrictions, fewer restrictions on remittances, and U.S. banks' access to the Cuban financial system.

On July 20, 2015, the Cuban and U.S. "interests sections" in Washington and Havana were upgraded to embassies, marking the re-establishment of diplomatic relations that had been broken in 1961..

On June 16, 2017 President Donald Trump announced that he was "canceling" the Obama administrations deals with Cuba, while also expressing that a new deal could be negotiated between the Cuban and United States governments.

All content from Kiddle encyclopedia articles (including the article images and facts) can be freely used under Attribution-ShareAlike license, unless stated otherwise. Cite this article:
Cuban Thaw Facts for Kids. Kiddle Encyclopedia.