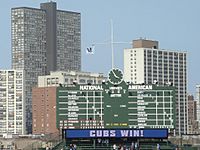 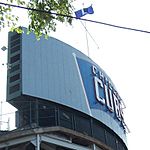 The Cubs Win Flag is a flag that is flown at Wrigley Field after every Chicago Cubs home win. The flag is called by about a dozen names. These names usually include several of the following words; either Cubs or Chicago Cubs; Win, W, White, White W, or W Win; and flag, banner or banner flag. Other common names for the symbol include Cubs Win Banner Flag. It has become an important symbol for fans. Days when the win flag is flown are known as "White Flag Days". The tradition of flying a win or loss flag over the stadium began soon after the scoreboard was built in 1937.

The flag has used two different colors with the letter "W" on a solid background. The flag used now is white with a blue "W." There is a flag used for losses with a letter "L". This flag is blue with a white "L" on it. Additionally, lights are shone on the flags that show if it was a win or loss. A new flag is used for each win. Some stores sell versions of the flag that also have the Cubs logo at the bottom.

All content from Kiddle encyclopedia articles (including the article images and facts) can be freely used under Attribution-ShareAlike license, unless stated otherwise. Cite this article:
Cubs Win Flag Facts for Kids. Kiddle Encyclopedia.