Cucumber is a census-designated place (CDP) in McDowell County, West Virginia, United States. As of the 2010 census, its population was 94. The community is centered on mining. Named either for nearby Cucumber Creek or for the cucumber trees in the area, it is the only community in the United States with this name. Its post office was still active as of October 2011 (see image). 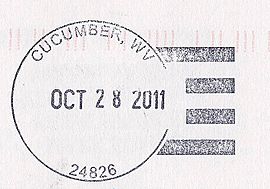 All content from Kiddle encyclopedia articles (including the article images and facts) can be freely used under Attribution-ShareAlike license, unless stated otherwise. Cite this article:
Cucumber, West Virginia Facts for Kids. Kiddle Encyclopedia.