Culture of Pakistan facts for kids

Pakistan has a rich and unique cultural heritage that has actively preserved its established traditions throughout history. Many cultural practices and monuments have been inherited from the rule of Mughal emperors and is very similar to the culture of most Indian Muslims. 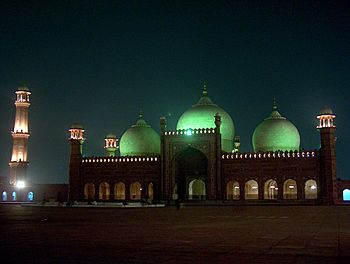 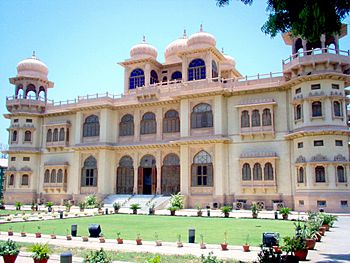 Mohatta Palace, one of the most beautiful landmarks in Karachi

Pakistan has a very rich cultural and traditional background going back to Indus Valley Civilization, 2800 BC–1800 BC. The region that is now Pakistan has in the past been invaded and occupied by many different peoples, including Greeks, White Huns, Persians, Arabs, Turks, Mongols and various Eurasian groups. There are differences in culture among the different ethnic groups in matters such as dress, food, and religion, especially where pre-Islamic customs differ from Islamic practices.

The pleasures of Pakistan are ancient: Buddhist monuments, Hindu temples, Palaces and Monuments built by Emperors, tombs, pleasure grounds and Anglo-Mogul mansions - some in a state of dereliction which makes their former grandeur more emphatic. Scuplture is dominated by Graeco-Buddhist friezes, and crafts by ceramics, jewellery, silk goods and engraved woodwork and metalwork. 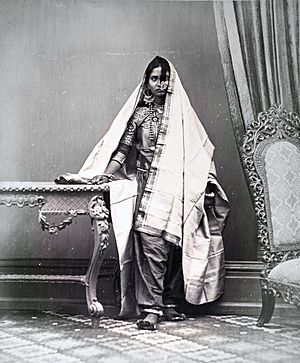 One of the most familiar sights in Pakistan, is that traditionally pakistani men wear Shalwar kameez. They come in many different styles, fabrics, colours and patterns that make them look really stylish. Pakistani women also wear shalwar kameez but the designs defer.

Also, women from sindh province and in the lower regions of Pakistan are known to wear saris more traditionally.

The sherwani is the national dress of Pakistan for men, as it is not specifically associated with any of the provinces. Most government officials wear the formal Black sherwani on state occassions.

Pakistani food is good and similar that of northern India, with a dollop of Persian, Turkish and Middle Eastern influence thrown in for good measure. This means menus peppered with baked and deep-fried breads (roti, chapattis, puri, halwa and nan), vegetables, meat curries, lentil mush (dhal), spicy spinach, cabbage, peas and rice, and of course that staple of hippies, the sturdy Hunza pie.

Street snacks are popular in cities - samosas and tikkas (spiced and barbecued beef, mutton or chicken) - are delicious, while a range of desserts will satisfy any sweet tooth. The most common sweet is barfi (it pays to overlook the name), which is made of dried milk solids and comes in a variety of flavours.

All content from Kiddle encyclopedia articles (including the article images and facts) can be freely used under Attribution-ShareAlike license, unless stated otherwise. Cite this article:
Culture of Pakistan Facts for Kids. Kiddle Encyclopedia.