Currie Hall is a hall within the Currie Building, which is an annex to the Mackenzie Building at the Royal Military College of Canada in Kingston, Ontario. It was built in 1922, and is a Recognized Federal Heritage Building.

The hall was designed by Percy Erskine Nobbs and built just after the end of the First World War by Sir Archibald Cameron Macdonell while he was commandant of the Royal Military College of Canada. It was built as a memorial to the Canadian Corps of the Canadian Expeditionary Force. It plays a prominent role in the life of the University. During special events, invited speakers and dignitaries may address the university population or general public from the Great Hall. Many conferences held in Kingston, Ontario may book the halls for lectures or presentations.

Currie Hall is decorated with the crests and battle colours of every unit that fought in France during World War I.

At the official opening of Currie Hall at Royal Military College on 17 May 1922, General Sir Arthur Currie remarked:

I cannot tell you how utterly embarrassed and yet how inexpressibly proud I am to witness this ceremony, and to be present when this hall is officially opened. This hall is to commemorate the deeds of our fellow comrades whom it was my great honour and privilege to command during the latter years of the War. It is a pleasure to look around and see the crests and battle colours of every unit that fought in France; and they remind me of the supreme effort of Canada, and they tell something of how Canada responded to the call to arms.

Under the supervision of Eleanor Milne, then Official Sculptor of Canada (1962–93), Maurice Joanisse, then an apprentice carver, sculpted the Royal Coat of Arms of Canada and Canada's motto, Ad mare usque ad mare (English: From Sea to Sea; French: D'un ocean à l'autre), over the main entrance to the building. Joanisse also sculpted the arms of Sir Archibald Cameron Macdonell and General Currie over the main entrance. Joanisse later served as Official Sculptor of Canada 1993 to 2006. 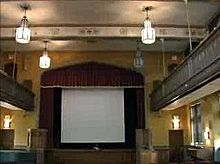 Major Stuart Forbes offered to paint the insignia as a gift to the College. General Macdonnell said that "no greater incentive or inspiration could be given to the Gentlemen Cadets of the Royal Military College of Canada than the sight of the emblems worn by the Canadian Corps."

This is an astonishing hall in which to speak. If you gaze up at the initials on the ceiling and at the paintings and the painted insignia around the walls, you are reminded that Canada is not a new country. [...] Militarily speaking, we have been at it for a long time. This hall is a conceptualisation of our participation in the First World War. All of that grandeur and tragedy is pulled together here in a remarkable way. I'm not sure that we could reproduce a hall of this sort to describe our military experiences of the last half century."

The badges and battle patches belonging to the units of the 1st, 2nd, 3rd, 4th, and 5th Canadian Divisions of the Canada Corps and the cavalry brigade adorn 132 oak panels on the face of the gallery.

Edwin Tappan Adney, who had served as engineering officer at the Royal Military College of Canada 1916-1919, created a set of three-dimensional shields of the Canadian provinces that adorn Currie Hall. 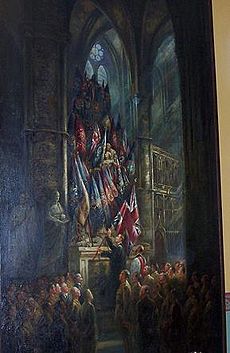 In 1947, Emily Warren's two large, 6.5 ft × 11.5 ft (2.0 m × 3.5 m), canvasses entitled Canada's Tribute, The Great War 1914–1919 and Placing the Canadian Colours on Wolf's Monument in Westminster Abbey. Canada's Tribute was hung in the Currie Memorial Hall at RMC. The paintings depict the 52 sets of colours, standards and guidons being placed for safekeeping on the Wolfe Monument in Westminster Abbey. The paintings were initially hung in the Canadian Parliament Buildings. In 2010, thirty one paintings of Canadian war memorials by F.A. (Tex) Dawson were unveiled outside Currie Hall. 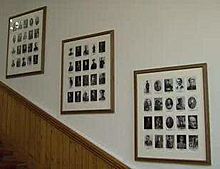 As you enter the Mackenzie Building, which is connected to the Currie Building, you immediately see a staircase which was designated the memorial stairway after the First World War by RMC Cadet #151 Sir Archibald Cameron Macdonell, RMC Commandant 1919-1925. The staircase is decorated with the photographs of 358 alumni including Captain Nichola Goddard who had died in military service.

Outside Currie Hall, stained glass windows feature images of the Royal Canadian Sea Cadets, Navy League Cadet Corps (Canada) and Navy League Wrennette Corp. In memory of David H. Gibson, C.B.E. National President, Navy League of Canada, 1938-1952 a stained glass window features images of a young sailor and God behind the ships' wheel. The window is dedicated to Canadians who in defence of the country went down to the sea in ships. The window includes a poem by H.R. Gillarm:

Proudly in ships they sailed to sea
Ahead their goal, perhaps eternity
But with God as their pilot they had no fear
Facing all danger as their course was clear
Their cargo? The record of their life
Some good, some bad, some peace, some strife.

Outside Currie Hall, on the first floor, two stained glass windows feature images of a military saint holding a staff and a shield and a military saint with a horse and three angels. The subject of the middle window is Truth Duty Valour, Royal Military College of Canada with the College shield and armour.

All content from Kiddle encyclopedia articles (including the article images and facts) can be freely used under Attribution-ShareAlike license, unless stated otherwise. Cite this article:
Currie Hall Facts for Kids. Kiddle Encyclopedia.