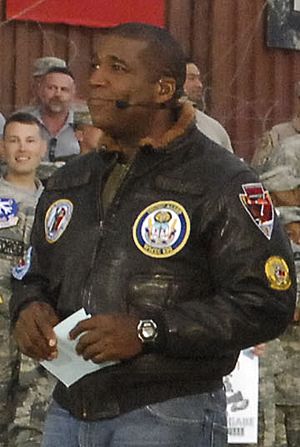 Curt Menefee (July 22, 1965) is an American sportscaster. He is the current studio host for Fox NFL Sunday with Terry Bradshaw, Howie Long, Michael Strahan, Jimmy Johnson and Jay Glazer. He also called play-by-play for NFL Europe on NFL Network and Fox and regional NFL games for Fox. He also calls Seattle Seahawks preseason games and did the same for the Jacksonville Jaguars. He was the host of The Curt Menefee Show and Unnecessary Roughness. Menefee was a sports anchor for KTVT-TV, WNYW-TV, and WTLV-TV. He made an appearance with Jose Mota on MLB on Fox on the May 24, 2008 game between the Los Angeles Angels of Anaheim and the Chicago White Sox. He also hosted three UEFA Champions League Final matches for Fox; 2010, 2011, and 2012. Menefee also is the host of UFC on Fox. He has also provided play-by-play for TopRank Boxing and ShoBox: The New Generation.

All content from Kiddle encyclopedia articles (including the article images and facts) can be freely used under Attribution-ShareAlike license, unless stated otherwise. Cite this article:
Curt Menefee Facts for Kids. Kiddle Encyclopedia.