Cuthbert A. Pattillo facts for kids 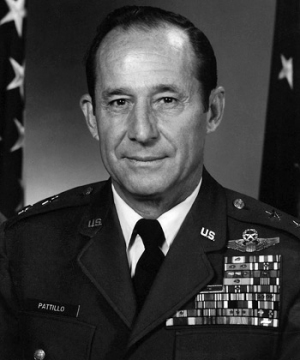 Cuthbert Augustus "Bill" Pattillo (June 3, 1924 – February 20, 2014) was a Major General in the United States Air Force. He served in World War II and the Vietnam War. He worked as Director of Plans and Policy for the United States Readiness Command at MacDill Air Force Base. He was as a pioneer in jet aerobatic demonstration teams. He was born in Atlanta, Georgia. His identical twin brother is Charles C. Pattillo.

Pattillo died from natural causes on February 20, 2014 at his home in Harrisonburg, Virginia. He was 89 years old.

All content from Kiddle encyclopedia articles (including the article images and facts) can be freely used under Attribution-ShareAlike license, unless stated otherwise. Cite this article:
Cuthbert A. Pattillo Facts for Kids. Kiddle Encyclopedia.