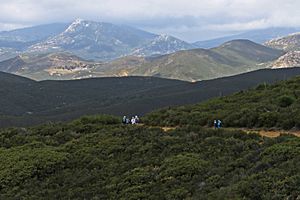 Cuyamaca Mountains "behind the clouds" and Stonewall Peak, seen from the Lagunas 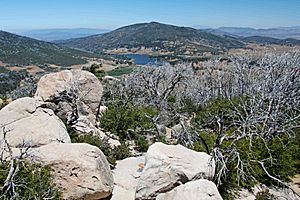 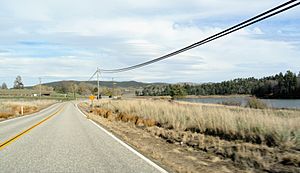 CA 79 looking north with Lake Cuyamaca on the right

Cuyamaca (Kumeyaay: 'Ekwiiyemak) is a region of eastern San Diego County. It lies east of the Capitan Grande Indian Reservation in the western Laguna Mountains, north of Descanso and south of Julian. Named for the 1845 Rancho Cuyamaca Mexican land grant, the region is now dominated by the 26,000 acres (105.2 km2) Cuyamaca Rancho State Park. Within the park is the prominent Cuyamaca Peak, the second-highest mountain in San Diego County at 6,512 feet (1,984.9 m).

The name is a Spanish corruption of the Kumeyaay phrase "'Ekwiiyemak", which means, according to Margaret Langdon's translation, "Behind the clouds". It has also been translated as "the place where it rains", a reference to the region's higher average precipitation than San Diego County's low coastal areas. Cuyamaca is a popular toponym lending its name to streets, businesses and a community college in the San Diego area.

During the Julian Gold Rush, a quartz gold mine the Stonewall Mine, was found on the south side of what is now Lake Cuyamaca. First a mining camp called Stonewall (1873–1876), then the mining company town of Stratton (1887–1888), renamed Cuyamaca City (1888–1906), at its peak had a population of 500 and served the Stonewall Mine.

In October 2003, most of the Cuyamaca region was consumed by the Cedar Fire. Nearly 25,000 acres (101.2 km2) in the state park and 120 homes in the community of Cuyamaca were incinerated. The historic Dyer Ranch house in the center of the state park, which functioned as a museum and the park headquarters, was also destroyed.

All content from Kiddle encyclopedia articles (including the article images and facts) can be freely used under Attribution-ShareAlike license, unless stated otherwise. Cite this article:
Cuyamaca, California Facts for Kids. Kiddle Encyclopedia.