Cyberia, London was the first internet café ever established, providing desktop computers with full Internet access in a café environment. Founded in 39 Whitfield Street, Fitzrovia London, in September 1994 by Eva Pascoe, David Rowe, Keith Teare and Gene Teare, the space served as an early hub for those with an interest in computing and the Net. The Cyberia franchise expanded to encompass a range of cafés in the UK and around the world. 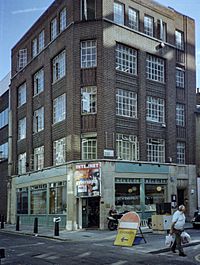 Cyberia was intended to be a women only venture, providing a space in which women could learn and play with new technologies in their own space. After launching the space however, Cyberia soon became very popular and this was no longer feasible. The internet café offered training sessions in key digital skills, notable alumni include Gary Barlow, David Bowie and Kylie Minogue.

Cyberia London basement spaces were also a thriving hub of activity. Subcyberia, home to the post-rave Sunday morning breakfast club and the café's gamer space, was frequented with gamers 24/7 such as Richard Bartle. Transcyberia, a "semi-nerd lab room creative technology centre" for software developers and designers, played host to a range of organisations including Michael Gurstein's Community Informatics Research Network. Ivan Pope's Webmedia, one of the first web design and build companies, was a tenant occupying part of the basement.

Cyberia enjoyed superfast internet access as a result of their partnership with the Easynet ISP founded by Rowe and Teare, who operated from the same building as the internet café. In turn Cyberia marketed Easynet products and services and were often the first port of call for Easynet customers looking for support for their new systems. Other early investors in Cyberia included Mick Jagger and Maurice Saatchi.

Around a dozen branches, some of which were franchises, were opened both in the UK and abroad, including Manchester, Edinburgh, Dublin, Rotterdam, Bangkok, Manilla, Tokyo and Paris. Cyberia Paris is of particular note, having been the first and last British enterprise to have leased space within the prestigious Pompidou Centre. By 1996, some 200 cybercafés had opened around the world, emulating the success of Cyberia.

By 2001 the Cyberia brand had been sold to South Korean interests, rebranding as 'Be The Reds' after a Korean football slogan.

The Fitzrovia premises are now occupied by the Michelin-starred restaurant and bar, Dabbous

All content from Kiddle encyclopedia articles (including the article images and facts) can be freely used under Attribution-ShareAlike license, unless stated otherwise. Cite this article:
Cyberia, London Facts for Kids. Kiddle Encyclopedia.