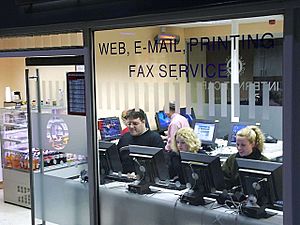 An Internet café (also called a Cibercafé) is a type of cafe. It is a business that provides Internet access to the public, usually for a fee. It also sells coffee and food. Internet cafes were introduced in the 1990s. The spread of modern-style cafes to many places, urban and rural, went hand in hand with computers. Many Internet cafes offer wireless Internet or have computers customers can use. They also offer telephones and newspapers. Internet cafe users need to be aware they have less security than most private networks. They are also more exposed to malicious software, also called 'malware'.

All content from Kiddle encyclopedia articles (including the article images and facts) can be freely used under Attribution-ShareAlike license, unless stated otherwise. Cite this article:
Internet café Facts for Kids. Kiddle Encyclopedia.