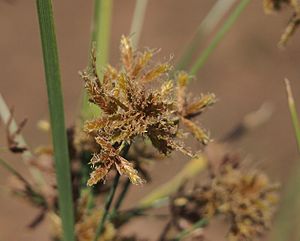 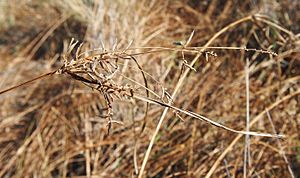 Cyperus gilesii, commonly known as Giles' flat-sedge, is a sedge of the Cyperaceae that is native to Australia.

The species was first formally described by the botanist George Bentham in 1878 in the work Flora Australiensis. The specific epithet honours the explorer William Ernest Powell Giles who led five major expeditions throughout central Australia.

C. gilesii is found throughout Australia. It is common throughout Queensland, northern South Australia, northern New South Wales and eastern parts of the Northern Territory. In Western Australia it only occurs only rarely in the Pilbara region. It is often situated ephemerally wet situations, including inland stream and river banks, floodplains and roadside drains.

All content from Kiddle encyclopedia articles (including the article images and facts) can be freely used under Attribution-ShareAlike license, unless stated otherwise. Cite this article:
Cyperus gilesii Facts for Kids. Kiddle Encyclopedia.