The Cyrus McCormick Farm and Workshop is on the family farm of inventor Cyrus Hall McCormick known as Walnut Grove. Cyrus Hall McCormick improved and patented the mechanical reaper, which eventually led to the creation of the combine harvester. The farm is near Steele's Tavern and Raphine, close to the northern border of Rockbridge and Augusta counties in the U.S. state of Virginia, and is currently a museum run by the Virginia Agricultural Experimental Station of Virginia Tech. The museum has free admission and covers 5 acres (2.0 ha) of the initial 532-acre (215.3 ha) farm. 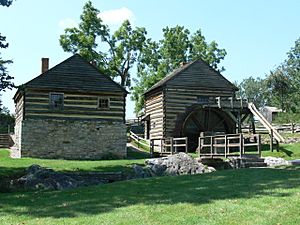 The farm originally covered 532 acres with buildings centered on a scant 5 acres. On the farm eight out of the nine original buildings are still standing, many of which have been renovated since the farm was created in 1822 by Robert McCormick (1780–1846). The eight existing buildings include a grist mill, blacksmith shop, slave quarters, carriage house, manor house, smoke house, schoolroom, and housekeeper's quarters. In the original construction of the farm there was also an ice house which was demolished in the 1960s. Each of these different buildings played a specific role in the daily routine of the Cyrus McCormick farm. The grist mill, built prior to 1800, was used to grind wheat for flour. The blacksmith shop was used to build and repair all the farm implements needed by the McCormick family and was where Cyrus McCormick engineered his reaper. Slave quarters served as the home for the nine slaves that the McCormick family owned. Furthermore, the carriage house was used as a garage for the carriages and other wheeled vehicles. The manor house is centrally located on the farm and was constructed of brick in 1822, making it the first building on the McCormick farm. Behind the brick manor house was the smoke house where meat was dried and smoked to preserve it through the winter. Refrigeration was not introduced until the late 19th century. The McCormick family also maintained a school on their property for neighboring children.

The McCormick Farm at Walnut Grove is known as the birthplace of the mechanical reaper, the predecessor to the combine harvester. Cyrus McCormick reportedly designed, built, and tested his reaper all within six weeks at Walnut Grove, although the design may have been merely an improvement upon the similar device developed by his father and his brother Leander over 20 years. Shortly after constructing his first reaper he went on to harvest his first crop with it later that year. After building his first reaper, Cyrus constantly went back to the drawing board to revise and improve his basic design, coming out with new models almost every decade.

After his father's death, Cyrus McCormick moved his base of operations from Rockbridge County, Virginia to Chicago, Illinois in 1847 because of the fertile prairie soil in the midwestern United States. In 1859, Cyrus was joined by his brothers Leander James McCormick and William Sanderson McCormick to form the company Cyrus H. McCormick and Brothers. By the end of the 19th century, McCormick's company had built a primitive combine, which could harvest grain even faster and cheaper than older reapers. Prior to inventing the reaper, farmers could only harvest 0.5-acre (0.20 ha) a day; after the reaper was invented, farmers could harvest 12 acres (4.9 ha) a day using less manual labor. The mechanical reaper did not require a family to toil all day to harvest crops. Instead, a single farmer merely operated the machine and the reaper would do the rest of the work. His work in mechanical reapers and harvesting techniques allowed farmers to cultivate plots of land bigger than ever thought possible. In 1902, the company was merged with competitor Deering Harvester Company and (smaller ones) to form International Harvester.

The farm remained in the McCormick family up to 1954, before being donated to Virginia Polytechnic Institute as an agricultural center and Farm Memorial. Currently, the schoolroom has vintage textbooks, toys, and other school supplies dating from the 1830s. It was declared a National Historic Landmark in 1964. The farm is less than 5 miles (8 km) from the interchange of Raphine Road and Interstate 81, halfway between Lexington, Virginia and Staunton, Virginia.

All content from Kiddle encyclopedia articles (including the article images and facts) can be freely used under Attribution-ShareAlike license, unless stated otherwise. Cite this article:
Cyrus McCormick Farm Facts for Kids. Kiddle Encyclopedia.