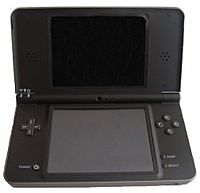 The Nintendo DSi XL (called Nintendo DSi LL in Japan) is a game console made and manufactured by Nintendo. It is the fourth and final model in the Nintendo DS family. It is a bigger version of the Nintendo DSi and the biggest, heaviest, and brightest of the four models. It has bigger screens than the original DS, DS Lite, or regular DSi. It was first sold in Japan on 21 November 2009, in Europe on 5 March 2010, in North America on 28 March 2010, and in Australia on 15 April 2010. The DSi XL comes with several titles with the console including Flipnote Studio, Brain Age: Math, Brain Age: Spelling and Arts, and Photo Clock. Like the DSi, the Game Boy Advance slot is removed. Like the previous two models, it was discontinued in 2014.

All content from Kiddle encyclopedia articles (including the article images and facts) can be freely used under Attribution-ShareAlike license, unless stated otherwise. Cite this article:
Nintendo DSi XL Facts for Kids. Kiddle Encyclopedia.