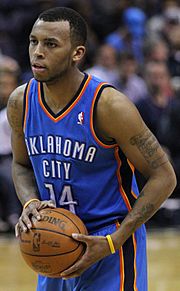 Daequan Cook (born April 28, 1987) is an American professional basketball player who currently plays for the Chicago Bulls of the NBA since 2013. He played for the Oklahoma City Thunder from 2010 through 2012. Then he played for the Houston Rockets from 2012 through 2013.

Cook was born on April 28, 1987 in Dayton, Ohio. He studied at Paul Laurence Dunbar High School.

All content from Kiddle encyclopedia articles (including the article images and facts) can be freely used under Attribution-ShareAlike license, unless stated otherwise. Cite this article:
Daequan Cook Facts for Kids. Kiddle Encyclopedia.