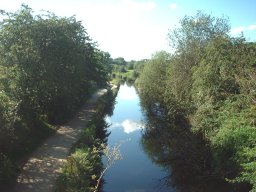 Daisy Nook is a country park in Failsworth, Greater Manchester, England, which runs through the Medlock Valley.

The name Daisy Nook came from a book by Benjamin Brierley titled 'A day out' or 'A Summer Ramble'. Brierley asked his friend Charles Potter, an Oldham Artist, to draw an imaginary place called Daisy Nook. Potter came to nearby Waterhouses to complete his drawing - and from then on the area was known as Daisy Nook.

Brierley's description of Daisy Nook was 'Two Banks seemed to have opened to receive a group of neat whitewashed cottages and after filling them with happiness, surrounded them with a curtain of trees, to shelter them from the outside world. Most of the cottages have gardens attached, growing flowers and vegetables, and there a small orchard displaying its ripening apples'.

Most of Daisy Nook now belongs to the National Trust after it was left to them by the late James Lublam, J.P. 'in order that the fields and woods be kept as a pleasure area'. The park is maintained by Oldham Metropolitan Borough Council.

Daisy Nook hosts an annual Easter Fair along Stannybrook Road - depicted by Lowry in one of his paintings.l

Daisy Nook is centred on the disused Hollinwood Branch Canal. The canal ran from Fairfield in nearby Droylsden to Hollinwood and opened in 1797. It runs through Daisy Nook, Woodhouses and Failsworth before entering Hollinwood in Oldham. The canal also has a branch which ran to Bardsley in Oldham, known as the Fairbottom Branch Canal. 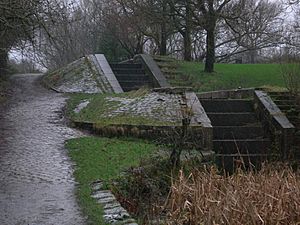 The canal and series of aqueducts are the centre of a campaign to restore the waterway by the Hollinwood Canal Society, which is run by local residents and waterway enthusiasts.

Painting of the park by L. S. Lowry

All content from Kiddle encyclopedia articles (including the article images and facts) can be freely used under Attribution-ShareAlike license, unless stated otherwise. Cite this article:
Daisy Nook Facts for Kids. Kiddle Encyclopedia.