Kids Encyclopedia Facts
Not to be confused with Damascus, Syria.

Damascus is the home of the annual Trail Days festival, and is known as Trail Town USA due to the convergence of four scenic trails in the town, including the Appalachian Trail, U.S. Bicycle Route 76, The Iron Mountain Trail, and the Virginia Creeper Trail. Damascus also is on the route of the Daniel Boone Heritage Trail and the Crooked Road Music Heritage Trail. The Trail Days festival is held around the middle of May each year and draws in excess of 20,000 tourists, making it the largest single gathering of Appalachian Trail hikers anywhere. During the festivals Hikers Parade on May 18, 2013, up to 60 people were injured when a car hit a crowd of people. Some victims were transported to area hospitals by ambulance or helicopters, with some critically injured. 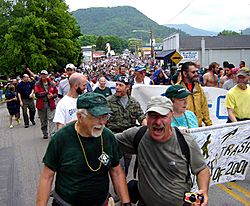 An Appalachian Trail Day in May

There were 484 households, out of which 18.2% had children under the age of 18 living with them, 40.7% were married couples living together, 11.6% had a female householder with no husband present, and 44.4% were non-families. 40.9% of all households were made up of individuals, and 20.9% had someone living alone who was 65 years of age or older. The average household size was 2.03 and the average family size was 2.72.

The climate in this area has mild differences between highs and lows, and there is adequate rainfall year-round. According to the Köppen Climate Classification system, Damascus has a marine west coast climate, abbreviated "Cfb" on climate maps.

All content from Kiddle encyclopedia articles (including the article images and facts) can be freely used under Attribution-ShareAlike license, unless stated otherwise. Cite this article:
Damascus, Virginia Facts for Kids. Kiddle Encyclopedia.