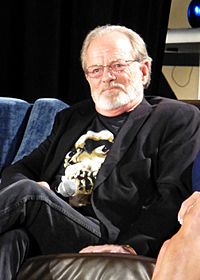 Dan Hicks (July 19, 1951 – June 30, 2020) was an American actor. Hicks was best known for starring roles in Evil Dead II, Darkman and Intruder. He starred in many movies directed by Sam Raimi such as Spider-Man 2 and Oz the Great and Powerful.

Hicks was born in Pontiac, Michigan.

All content from Kiddle encyclopedia articles (including the article images and facts) can be freely used under Attribution-ShareAlike license, unless stated otherwise. Cite this article:
Dan Hicks (actor) Facts for Kids. Kiddle Encyclopedia.