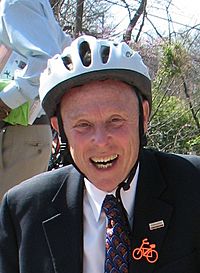 Darwin Hindman (April 30, 1933 – June 17, 2019) was an American politician and lawyer. He was the longest-serving mayor of Columbia, Missouri, totalling 15 years. He became mayor in 1995 and finished his fifth elected term in 2010, after deciding not to run for re-election. In 2009, he received the Leadership for Healthy Communities Award along with mayors Michael Bloomberg (New York City) and Gavin Newsom (San Francisco).

Hindman was born in Columbus, Ohio. He was pilot in the United States Air Force. He died of lung disease on June 17, 2019 in Columbia, Missouri. He was 86.

All content from Kiddle encyclopedia articles (including the article images and facts) can be freely used under Attribution-ShareAlike license, unless stated otherwise. Cite this article:
Darwin Hindman Facts for Kids. Kiddle Encyclopedia.