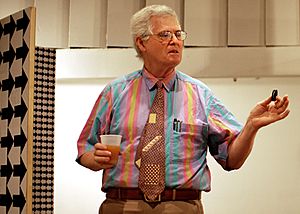 David Geddes Hartwell (July 10, 1941 – January 20, 2016) was an American critic, publisher and editor of science fiction and fantasy. He was best known for work with Signet, Pocket and Tor Books publishers. He was also known as an award-winning editor of anthologies. He was born in Salem, Massachusetts.

Hartwell died in Pleasantville, New York from complications of a fall on January 20, 2016 at the age of 74.

All content from Kiddle encyclopedia articles (including the article images and facts) can be freely used under Attribution-ShareAlike license, unless stated otherwise. Cite this article:
David G. Hartwell Facts for Kids. Kiddle Encyclopedia.