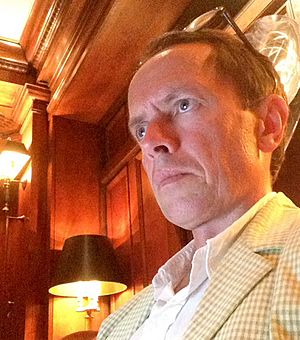 David Woodard (born April 6, 1964 in Santa Barbara, California) is an American postmodern writer and conductor. He invented the concept and portmanteau word prequiem, which designates a musical composition to be rendered as its beneficiary lay dying.

Woodard is also known for his work with Nueva Germania, a settlement in Paraguay. His German book of correspondence Five Years, coauthored by Swiss novelist Christian Kracht, describes some of the humanitarian work performed there.​

All content from Kiddle encyclopedia articles (including the article images and facts) can be freely used under Attribution-ShareAlike license, unless stated otherwise. Cite this article:
David Woodard Facts for Kids. Kiddle Encyclopedia.