Deanmill is a historic timber town located in the South West region of Western Australia, near Manjimup. Its postcode is 6258.

After the Government Trading Concerns Act 1912 was passed in December of that year, several State-operated businesses were established. One of these was State Saw Mills, which commenced with purchasing the South-West Timber Hewers' Co-operative for £80,000. Construction on the State's Number 1 sawmill, later called Deanmill, began in 1913, as did construction of the Number 2 and 3 mills at Big Brook, later called Pemberton. The mills cost an estimated £138,000, and were to provide timber railway sleepers for the Trans-Australian Railway. Construction of the mills was delayed by heavy rainfall, and the railway sleepers were delivered late. Other problems included shipping disputes and the Commonwealth government's price for sleepers.

State Saw Mills created a township surrounding the Number 1 mill, called Deanmill after a construction engineer named A. Dean. They followed accepted practice at the time of placing a timber mill in a valley with accommodation and other facilities close by. Deanmill Primary School was built in 1914 by the Public Works Department in association with State Saw Mills. The school initially consisted of a single classroom, administration building and shed, all constructed out of timber.

Premier Geoff Gallop visited Deanmill in December 2002 when the State government was compiling its Forest Management Plan, to start in 2004. The Government entered into negotiations with Sotico to provide a guaranteed volume of jarrah sawlogs over 10 years, to maintain the timber industry in the area. Sotico was a subsidiary of Wesfarmers, which sold the company in 2004.

Several assessments have been made regarding the environmental impact of the sawmill and associated activities. A 2004 assessment by Wesfarmers showed arsenic contamination in and surrounding a drainage channel to Lefroy Brook. The WA government accepted responsibility for the issue, as State Saw Mills used arsenic to treat timber in the 1920s. Wesfarmers accepted responsibility for groundwater and soil contamination with creosote, and the clean-up cost was shared by Wesfarmers and the State government. 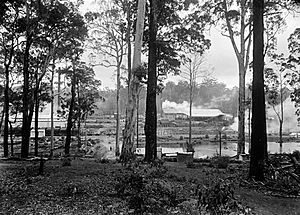 All content from Kiddle encyclopedia articles (including the article images and facts) can be freely used under Attribution-ShareAlike license, unless stated otherwise. Cite this article:
Deanmill, Western Australia Facts for Kids. Kiddle Encyclopedia.