The name, Debruce, is derived from one of its early European investors, Elias DesBrosses, a French Huguenot who with Renssalier and others, escaped from France and persecution, living in the Netherlands. With others he invested in the New World. While he remained in Europe, his offspring became wealthy land owners and were involved in New York politics.
Debruce was once a resort town, catering to fly fishermen. George LeBranch, author of The Dry Fly and Fast Water in 1914, who had his home in Debruce, famously cast his first dry fly there. The DeBruce Club Inn, first owned by Charles B. Ward and then by Walter Kocher since the early 1940s, was also there. The Inn offered a nine-hole golf course, tennis courts and fishing on several miles of the choicest water on the upper Willowemoc. It had its own farm, fish hatchery, hydroelectric plant, private area telephone system, and later TV cable. Movies were shown on weekends. During its heyday in the 1930s and 1940s it was a popular destination for sportsmen from the city, famous for its food and smiling hostesses, and Chef Cesar Ricci. Chef Ricci would oversee its grand formal picnics at both Little Falls and at Mongaup Pond with tables, linens, and flatware with animals spit roasted whole.

In the early 1900s one of LeBranch's favorite dry flies was called the pink lady—pale pink floss ribbed with gold tinsel, duck wings, ginger hackle and tail on a #12 hook. Amusingly, a favorite drink at the Inn was also called the pink lady—gin, grenadine, apple brandy, lemon juice and cracked ice, strained into a stemmed glass. It was also popular with parents of children at the many area summer camps. And

The main Inn was torn down in 1970 by its current owners, the Kocher family. The Auditorium and several hotel buildings still stand. The DeBruce Fly Fishing Club leases what was the Fishermans'Cottage, the hatchery and the several miles of Willowemoc. The properties are currently owned and operated by the Kocher family.

The New York State Department of Environmental Conservation has run the DeBruce Environmental Education Camp, for youth who are 12 to 14 years old in DeBruce. Situated on over 300 acres (1.2 km2) of land adjoining the Catskill Forest Preserve, Camp DeBruce has been in operation since 1948. Formerly a private estate and fish hatchery, the DeBruce Camp was acquired by the DEC in the 1940s and converted into a conservation education camp for boys. In 1975, Camp DeBruce began operation as a co-educational facility. Other area camps during the hotel's heyday were Camp Acadia and Our Lady of Lourdes Camp for Girls, and Hunter Camp.

DeBruce was, in its earliest days, a site for one of the Catskills' largest tanneries, employing over 100 men shortly after it was established in 1856. This industry relied on the easy availability of water and hemlock trees, about 5% of the forests. The trees were cut down and their bark, one of the cheapest supplies of tannin available, was peeled off, leaving the timber to rot. The leather was processed in factories near the water and often actually in the forest. The industry quickly depleted the trees, peaking in about 1870, and was entirely gone from the Catskills by 1895, much to the relief of the trout fishermen, no doubt. Bald Mt. in DeBruce was so named because it was left that way by the tanneries.

The one remaining hotel in DeBruce is DeBruce Country Inn. 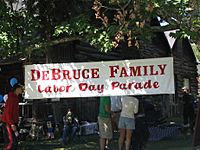 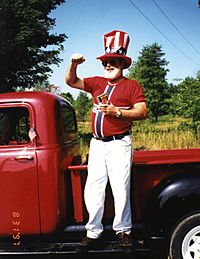 The organizer of the parade, Steve Dill

Today, the town is renowned for its "DeBruce Family Labor Day Parade". Held annually since 1993, it brings the entire community (many, if not most, summer people) out to celebrate the Autumn harvest, the end of summer, or just to be together one more year. It is ably organized by Steve Dill (pictured) who enthusiastically energizes his friends and neighbors into a frenzy of speech-making, face-painting, dancing, games, food, costumes and assorted show-and-tells. Often there is a King or Queen of the parade—Floyd Cook, the 100-year-old "Mayor of the Hill" has had this honor several times. Unfortunately, Cook died in August 2012. An unusual feature of the parade is its shortness. The course, it starts in Dill's front yard, and stretches over about one city block, which is considerably shorter than the line of marchers and vehicles in it.

In 2007 it had a "green" theme and even had two aircraft "buzz" the parade. While the parade was not held in 2009, it returned in 2010 with a theme of "Books, Bubbles and Balloons." In 2011, the theme was "Fun, Food, and Fitness", while in 2012, it was "Cars, Crafts, and Country". 2012 had the biggest turnout for the Debruce parade since the start of the tradition. There were 50 antique cars, numerous organizations, businesses, a firetruck, and the MountainTones marching band. The band got its start at the Debruce parade, and has played at many other events and parades around Sullivan County.

Since 2010, the Debruce parade has been held as a fundraiser for the Livingston Manor Free Library, which is located about 6 miles away from the parade site.

All content from Kiddle encyclopedia articles (including the article images and facts) can be freely used under Attribution-ShareAlike license, unless stated otherwise. Cite this article:
Debruce, New York Facts for Kids. Kiddle Encyclopedia.