Livingston Manor is a hamlet (and a census-designated place) in Sullivan County, New York, United States. The population was 1,221 at the 2010 census.

Livingston Manor is in the south part of the Town of Rockland, adjacent to New York State Route 17.

Main Street, from a postcard mailed in 1909

The community capitalizes on the illustrious Livingston Manor name because Livingston family members and descendants had a house there. However it was not part of the original manor, which was about 60 miles (97 km) east in Dutchess and Columbia counties, extending on both sides of the Hudson River.

The Sullivan County community was part of the Hardenbergh patent in 1716, which included much of the Catskill Mountains.

Edward Livingston died in 1864. Purvis was renamed as Livingston Manor in 1882. Edward Livingston's residence, according to a sign in the village, was on a site now occupied by the village firehouse. Another town source says that it was on a site later developed as the Rockland, New York Town Hall. In the 1930s a Livingston descendant arrived in Livingston Manor claiming title to his ancestral land, which had previously been held by tenants. He won his case in court, and the people whose ancestors had been tenants had to purchase the property they had been living on for years.

Other early settlers were the Benton family, who immigrated from Essex, England, in the mid-17th century, settling in Guilford, Connecticut. Records show some of their descendants arrived in Sullivan County in the late 18th century from Connecticut, purchasing a large tract of land in what is now known as the Township of Liberty. They were likely Scots-Irish in ancestry. They took on many jobs in Sullivan County. Other landed families settling in the surrounding area were the Bascoms, Stewarts, Wests, Harringtons, Williams, Cochrans, Motts, Kimballs, Darbees, Woodards, Barnharts, and Joselyns. Some of these families descendants still reside in the area.

In the late 19th and early 20th centuries, the village attracted immigrants from eastern Europe. Jewish immigrants founded the Agudas Achim Synagogue. It was listed on the National Register of Historic Places in 1998.

Fly fishing in the United States

The area claims to be the "birthplace of fly-fishing in the United States" largely because of trout fishing on the 27-mile (43 km)-long Willowemoc Creek. It flows between the village and Roscoe, New York, where it intersects the Beaver Kill. The Catskill Fly Fishing Center and Museum is on the north edge of the town on the Willowemoc Creek.

Today fish stocks in the Catskills are managed by state wildlife agents. All of the stocked fish (1 million pounds each year) for the Catskills, as well all the reservoirs in the New York City water supply, are bred at the Catskill Fish Hatchery just northeast of Livingston Manor in DeBruce, New York.

Since 2004, the community has sponsored an annual Trout Parade (organized by the Catskill Art Society and the Chamber of Commerce). It has been compared to the Mermaid Parade. 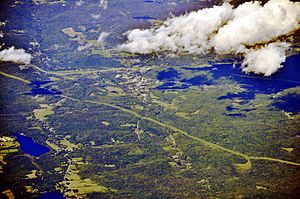 Aerial view of Livingston Manor (at center) and environs roughly from the southwest (2013). Shandelee Lake at lower left.

The downtown of Livingston Manor, mostly along Main Street, has several restaurants, a large grocery store, several art and antique shops. It is the scene of an annual "trout parade" in June that draws marching bands, fire trucks and other local amusements. The Catskill Art Society runs a non-profit multi-arts venue on Main Street, the CAS Arts Center, which offers exhibits on view in their galleries and fine arts classes to the community.

The Willowemoc Creek that runs through town cause flooding issues with the rain and storms that hit Livingston Manor.

There were 515 households out of which 33.8% had children under the age of 18 living with them, 41.4% were married couples living together, 16.1% had a female householder with no husband present, and 35.9% were non-families. 28.5% of all households were made up of individuals and 11.8% had someone living alone who was 65 years of age or older. The average household size was 2.62 and the average family size was 3.21.

All content from Kiddle encyclopedia articles (including the article images and facts) can be freely used under Attribution-ShareAlike license, unless stated otherwise. Cite this article:
Livingston Manor, New York Facts for Kids. Kiddle Encyclopedia.